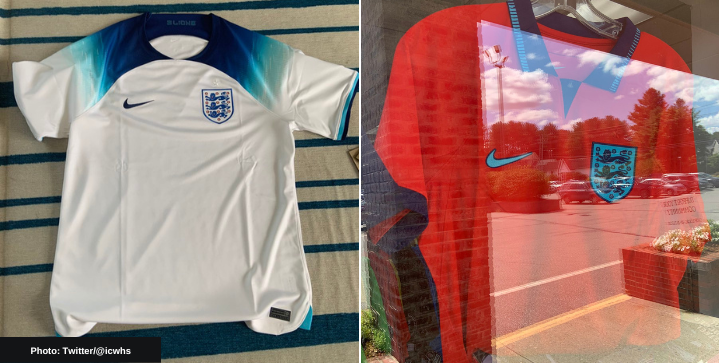 The supposed Nike home shirt is a mainly white colorway with sky blue and navy patterns on the shoulders and cuffs. The light and dark blue center split hues carry down the sides of the shirt, giving the shirt an overall retro vibe.

But social media already has a fit with the home shirt, saying it looks like a training kit. US fans are saying the same thing about their dull Nike USMNT kits.

“Nothing screams knocked out in the RO16 more than this shite,” commented one fan. “Might be the worst, most unattractive home kit England have ever produced,” tweeted another.

Overall, 2022’s England away kit is far from the clean and simplistic 2006 World Cup home kit.

Alleged England away shirt is a little more nostalgic in character, reminiscent of the Three Lions 1992 away red shirt.

Unlike the home kit, the away shirt comes with a classic Umbro-esque collar that combines dark and light blue shades.

The Nike swoosh and coat of arms aptly feature on the chest. Not surprisingly, fans are overwhelmingly excited for the away red stripe over the home one, with some fans suggesting that the team wear the red version every game.

Wrote one fan: “home kit is easily the worst England kit I’ve ever seen, possibly the worst kit of all time. Aways pretty nice though tbf.”

“Could’ve been a plain white shirt and it would be more of an England shirt than this, just hope the away kit leak is right so we have at least one good kit,” tweeted another.

Which England kit do you prefer, the home or away?