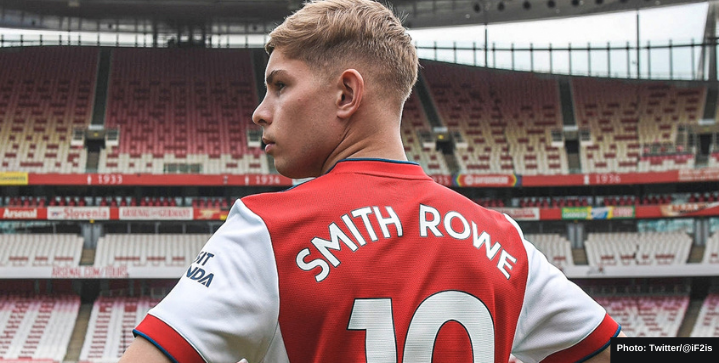 Arsenal’s Emile Smith Rowe has signed a new long-term contract with Arsenal and has been given the No.10 shirt.

Mesut Ozil, Jack Wilshere, Robin Van Persie, and Dennis Bergkamp were the previous Gunners to wear the iconic No. 10 shirt.

“ I feel like I didn’t really have to think about it too much you know,” said Smith Rowe on penning his new 5-year deal. “I’ve been at the club since I was 10 years old, so for me it was just about carrying on at this club, so like I said, I’m really happy.”

No Arsenal player provided more assists across the Premier League and Europa League during the 2020/21 season than Emile Smith Rowe (7).

The 20-year-old plays with the grace and style of the Arsene Wenger mold — not surprising since the Hale End boy joined the Gunners in 2010 at the age of ten.

“As we all saw last season, Emile is an intelligent player with excellent ability,” said Gunners boss Mikel Arteta.

“His sharpness on the turn and exceptional vision have already made him a key player for us. His attitude and willingness to learn have also been very impressive.

“Along with the first-team staff, huge credit also goes to our senior players, who have played such an important role to help Emile develop, gain confidence and perform the way he did last season.

“I know the fans will join us in being delighted that Emile has committed his future to the club. We’re now looking forward to helping him develop further and seeing him become even more important to the strong young team we’re building.”