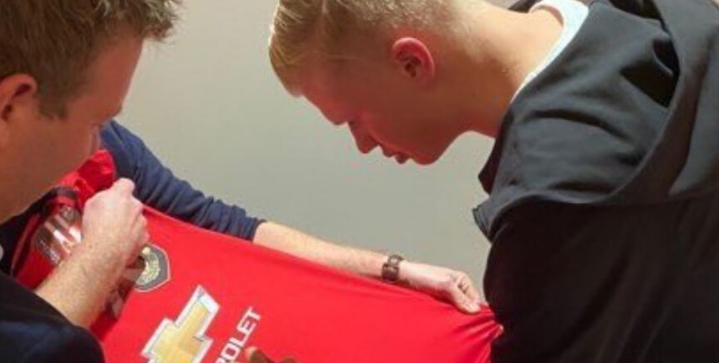 Manchester United appear to be on the verge of signing Norwegian starlet Erling Haaland after a picture emerged of him signing a Red Devils shirt.

The 19-year-old forward shared the image on his Instagram Stories account, although he posted images of him signing a Leeds (his father’s team), Napoli, Molde, RB Salzburg, and Bryne (his first club) kits as well.

Is there a shock transfer to Leeds in the cards? Probably not.

“I don’t comment on them speculations so that’s it,” he said. “He [Haaland] knows what he wants to do and he knows what he’s gonna do. So I don’t have to give any advice to any other teams’ players,” said Man United boss Ole Gunnar Solskjaer when asked about the player’s future.

Haaland visited two Bundesliga clubs — Dortmund and RB Leipzig — last week. However, given Haaland’s ties to Solskjaer back at Norwegian club Molde back in 2017, it’s likely the forward will follow his former boss to Old Trafford.

The teenager has also been linked to Real Madrid and Liverpool.

According to the Daily Mail, Haaland’s imminent £76m deal will see the player go back to RB Salzburg before featuring in Old Trafford next season.