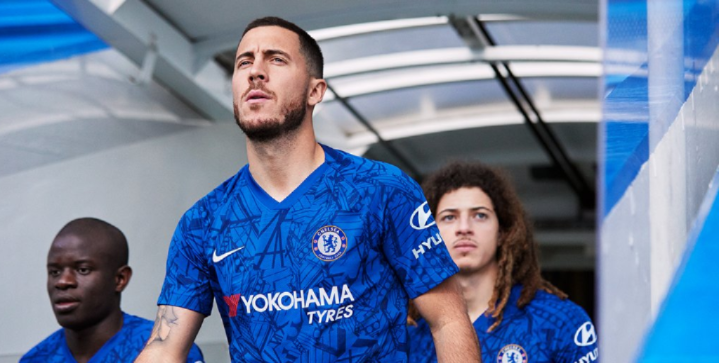 Chelsea unveiled its new kit for the upcoming 2019/2020 season this week.

The Blues star player Eden Hazard served as the face of the launch despite rumors that he’s headed to the Bernabeu this summer.

Nike designed the kit to celebrate the team’s iconic Stamford Bridge stadium where the team has played since 1905. The shirt displays a spread of graphics depicting the Matthew Harding Stand, the East and West Stands and the Shed End.

Said Hazard: “It’s our home. Every time we step out to play in front of our fans, it just feels right. We’ve created so many memories at the Bridge over the years so it’s only fitting that we pay tribute to such an iconic stadium through the jersey.”

The classic blue shirt features a V-neck with the club’s lion imprinted on the inside that reads the ‘PRIDE OF LONDON.’ The shorts are also solid blue, paired with red and blue-trimmed white socks.

Chelsea plays Watford this weekend in what is a critical match to retain its positioning in the top 4 of the Premier League. The Blues are also seeking the reassurance of a Champions League spot by winning the Europa League — tied 1-1 on aggregate, the team faces Eintracht in leg 2 of the semifinals next Thursday.