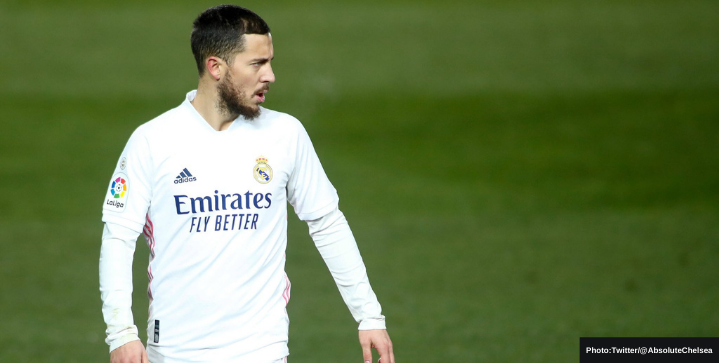 Real Madrid confirm that Hazard has suffered Psoas muscle injury, which could rule him out for 4-6 weeks.

The “Belgian Messi,” who once tore up formidable Premier League defenses, has endured the worst turn of fortune in La Liga. He’s now suffered more injuries/illnesses than he has goal contributions at the Santiago Bernabéu.

“It’s something new. I can’t really give any more of an explanation,” said Zidane.

“Something’s up, because he was never injured in his entire career [before joining Real] or there were very few injuries. We want to help him and hope he’s back as soon as possible.

“They’re things that I can’t explain. I want to be positive and hope that it’s not too much of a problem.

“We’re going to try and figure out why it’s happening but right now we can’t explain it.”

The medical staff will have to get down to the bottom of the injury. Belgium doctor Kris Van Crombrugge advises Hazard to get surgery as soon as possible so the player can be available in this summer’s Euros.

“Without wanting to interfere: I would advise to do it as soon as possible so it doesn’t hamper his dream of playing at the Euros,” he told VTM.

Can injury-probe Eden Hazard still make his mark at Madrid?

Hazard signed to Real Madrid during the club’s $500 million spending spree in the summer of 2019, with the Belgian’s deal amounting to $114m plus add-ons.

A fit Hazard is undoubtedly one of the most lethal wingers in the game. He scored 110 goals and provided 92 assists in 352 games across all competitions for Chelsea.

Everyone expected the talismanic winger to make his mark on La Liga.

While Hazard sustained only ten injuries in 7 years at Chelsea, missing only 21 games, he’s gone on to suffer 11 injuries in just two years with Madrid — missing 56 games since joining Los Blancos.

Hazard has notched four goals and made seven assists in just 36 matches with the club.

The 30-year-old will hope to turn things around before his contract expires in 2024. “Eden Hazard has a long contract with us,” said Zidane last week. “And when he gets fit, he will play like a mother-fucker.”