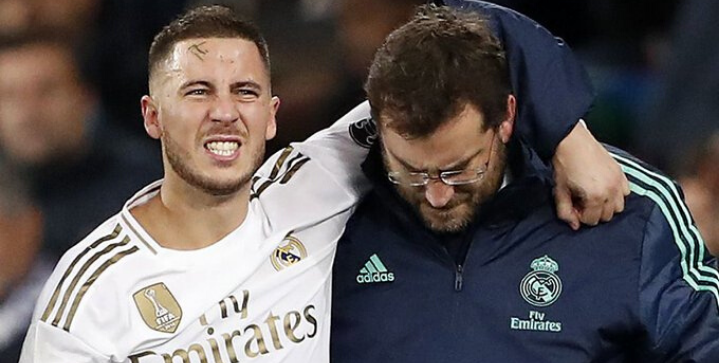 Eden Hazard is expected to miss the season’s first Clasico on December 18 following a stress fracture in his right ankle.

Hazard suffered the injury last week in the team’s 2-2 draw against PSG in the Champions League group stage.

His Belgium teammate Thomas Meunier took a haphazard swipe at his ankle and injured him. Cameras showed Real Madrid’s latest Galactico limping off the pitch in pain.

The club posted Hazard’s official medical reported on its website:

Following tests carried out on our player, Eden Hazard, by Real Madrid’s medical department, the development of the perimalleolar bruising in his right leg has seen him diagonsed with an incomplete external microfracture in the aforementioned area. His recovery will continue to be assessed.

The 28-year old ‘Belgian Messi’ was just starting to come into form after a slow start at the Santiago Bernabeau.

While he’s only been on the scoresheet once, he was starting to dazzle with the ball as he did in North London.

Los Blancos signed Hazard signed from Chelsea over the summer for $114m with fees exceeding $165m.

Real Madrid are also expected to be without Marcelo for the match. Meanwhile, Barcelona winger Ousmane Dembele is still a question mark for the game at Camp Nou as well.