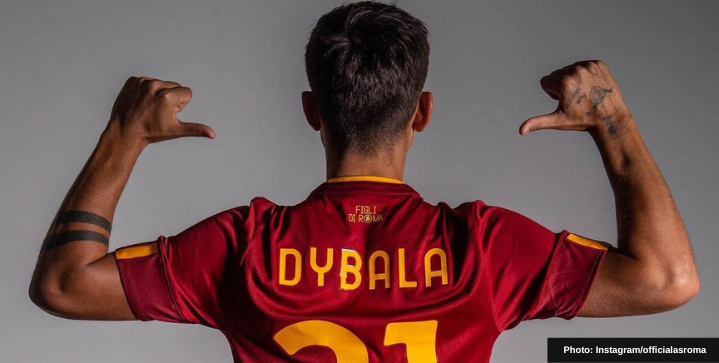 According to Corriere Dello Sport, AS Roma sold 535,000 Paulo Dybala jerseys in 24 hours.

The ex-Juventus star signed a three-year contract with the club, earning him €6 million net per year plus add-ons. The club received €24M in jersey sales in one day, effectively earning back what they paid for the player.

Ronaldo sold 520,000 kits upon signing for Juventus in 2018, earning the club more than half of the £105M fee they paid Real Madrid for the transfer.

Messi still owns the record for most jerseys sold in 24 hours, with 820,000 kits sold upon his signing to Paris Saint-Germain.

Roma fans are raving about their new signing, even making a mural of him in the center of Rome. That must also be a new record, along with the fact that “San Paulo la Joya” also got a gelato flavor after him.

The 28-year-old is eager to take Roma to the next level.

“The days that have led up to me signing this contract have been filled with so many emotions,” Dybala said upon the official announcement.

“The speed and determination with which Roma demonstrated just how much they wanted me made all the difference. I am joining a team that is on the up, a club that continues to put in place strong foundations for the future, and a coach, Jose Mourinho, that it will be a privilege to work with. As an opponent I have always admired the atmosphere created by the Roma fans – I now cannot wait for the chance to salute them while wearing this shirt.”

AS Roman legend Francesco Totti offered the iconic number 10 jersey to Dybala, but the Argentine refused the offer. “I know the number 10 shirt is very important here,” Dybala told fans.

“But I think that shirt must still belong to Totti for everything he did. I thanked him but to wear a shirt like this you need to have a lot of respect and responsibility. Maybe one day I will deserve to wear it.”