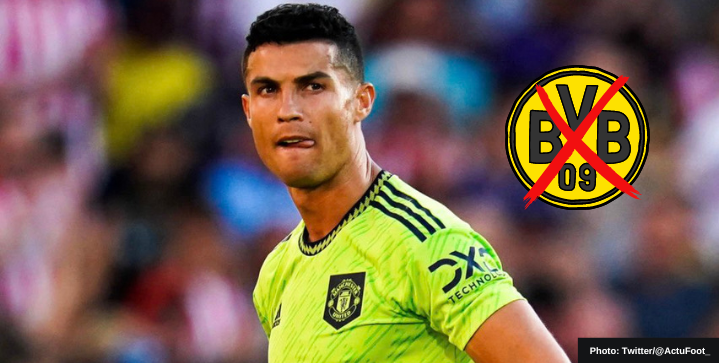 Time is running out for Ronaldo to find an exit from Manchester United. Earlier today, it looked like Dortmund was going to throw him a loan bone.

Ronaldo’s agent Jorge Mendes appeared to have some interest from BVB.

But that’s not the case, according to Bild. BVB considers the 37-year-old Portuguese striker too old and too expensive.

Dortmund is just the latest string of clubs to turn down the superstar who’s offered himself to Chelsea, Bayern Munich, and PSG to no avail. Ronaldo rejected a whopping €275m offer from Saudi Arabian club last July due to his mission to play for a Champions League team.

Currently in the relegation zone, two games into the new season, Manchester United does not align with Ronaldo’s ambitions. The storied club has been linked with a potential takeover from Elon Musk and British billionaire Sir Jim Ratcliffe this week.

“Cristiano doesn’t have time to waste building teams or waiting for the next season. He wants to be better, continue to be at the top, score goals and be the greatest. That’s why his reactions are normal,” former United and international teammate Nani told the Rio Ferdinand show yesterday.

With the transfer deadline for the summer window looming, where do you think Ronaldo will suit up next season?