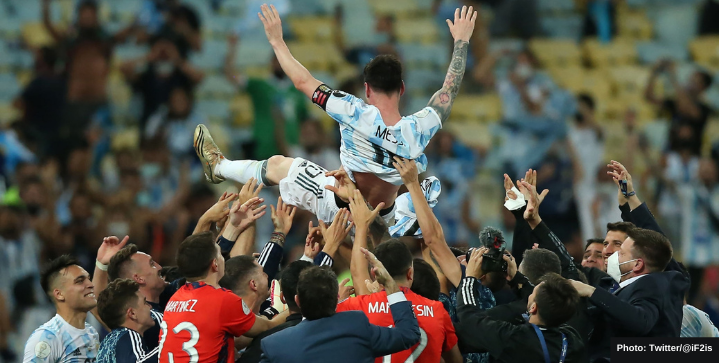 It’s been a good week for Lionel Messi fans.

According to France Football, Lionel Messi is currently a favorite to win this year’s Ballon d’Or.

The Argentine is coming off an impressive Copa America performance in which he led his team to their first tournament title since 1993. He dished up four goals and five assists in six matches.

It was also Messi’s first senior trophy with Argentina.

Messi has already won the Ballon d’Or more times than any other player. Should Messi go on to win the Ballon D’Or, his 7th, he’ll be the first player to ever win the award in three different decades. Not bad for a player who many considered ‘finished’ after failing to lead Barcelona to any club titles the prior two seasons, combined with the overarching stigma of not ever winning an international trophy for his country.

Now Messi can put all that behind him. He scored 38 goals and dished 14 assists at club level this season, and along with winning the Supercopa de Espana, has finally nailed down the elusive international trophy. Messi earned Man of the Match in 68% of the games he played in 2021.

The Italian midfielder is of course is a major underdog to win his first Ballon d’Or. But Jorginho guided Chelsea to the Champions League and Italy to Champions of Europe. He also set the record for the most interceptions made at a single European Championship tournament with 25. Based on last night’s video, he seems to be shocked by the Ballon d’Or nods as well.

Now, the focus on Messi shifts to his contract renewal at Barcelona. Messi turned a free agent at the end of June but expects to extend his deal with the Catalan giants later this month.