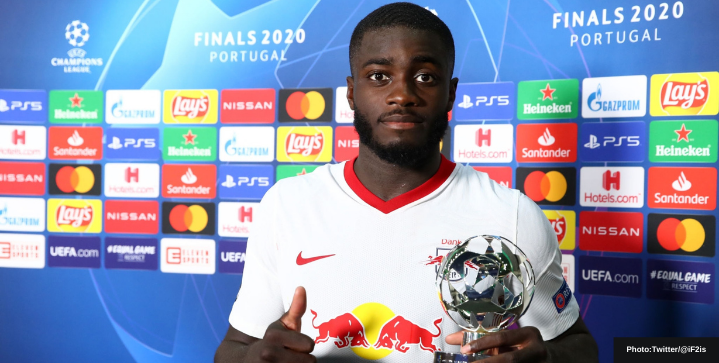 Dayot Upamecano is set for a €42M move to Bayern Munich this summer after agreeing to a pre-contract agreement back in February.

The 22-year-old Frenchman will follow his current and future boss Julian Nagelsmann to the Bavarian giants.

The move was announced via the club’s Twitter account, with Bayern confirming the player’s official five-year deal and July 1, 2021 start date.

Upamecano is seen as a successor to the outgoing David Alaba at the back, with the Austrian international set to join Real Madrid.

This isn’t the first time that Bayern have tried to sign Upamecano. He only failed to make the move when he was 16 due to a veto from his mother.

“That’s true. Mothers know what’s best for their kids. The offer was tempting. I wanted to take the shortest path to the top, but mom said: No, gather experience first then you can still make the big move,” the central defender told Kicker.

“Back then it was difficult to accept, but in hindsight she was right. My current path is the right one. Playing in Liefering, Salzburg and Leipzig helped me gather experience and be able to establish myself at an even higher level.”

Why he chose Bayern this time around

“I spoke a lot with my family and my agents and then had the feeling that moving to Bayern next season is the best decision for me and my career.”

“When FC Bayern gets in touch, you are really proud,” Upamecano told Sportbuzzer.

“It doesn’t get much higher, especially when you’ve played in Leipzig before.

“I had offers from abroad, but I was sure relatively quickly that I wanted to stay in Germany and in the Bundesliga. I like it here, the level of the games, the fans, the stadiums.”

On working with Nagelsmann

“Working with Julian Nagelsmann is fun. He understands the game. I took big steps under him, he helped me especially tactically. He showed me many videos of where I can improve. I can only praise him and consider myself lucky to be able to work under him.

He’s a great coach. I’m delighted we’ll work together again, but we’re not thinking about next season yet, we’re all thinking about this one. We want to win the cup against Dortmund and top our best performance from the 2016/2017 season.”

On his future success at Bayern

Despite Upamecano’s early success at Leipzig, he still feels like there’s room for improvement.

“I can be more of a goal threat, better at the buildup play, better at headers, better at everything. You never stop learning.”

How good will Upamecao be at Bayern next season? Let us know on Facebook.