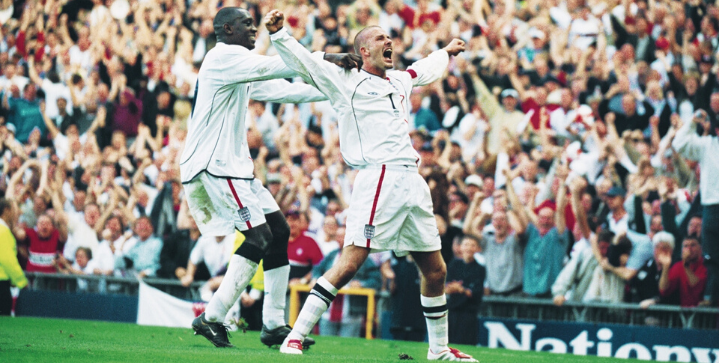 More than half of the 65 goals David Beckham scored for club and country in his two-decade career came from set pieces. He could literally bend the ball into any corner of the net. But he also scored some wonder goals during in the run of play as well. From set pieces to exquisite chips, here are our favorite Beckham goals of all-time.

The aerial kick soared over Wimbledon’s goalkeeper Neil Sullivan and into the back of the net to the awe of 25,000 fans. David Beckham’s halfway line goal announced his arrival onto the world stage and helped launch his career into the stratosphere.

One of David Beckham’s best and most important goals came on his old stomping grounds at Old Trafford. With England down 2-1 to Greece, the Three Lions needed a dose of magic. So what better than the bend it aficionado himself to seal the tie with a beauty of a kick to send England to the 2002 World Cup. Glorious.

While the Red Devils lost the semifinals match to eventual Champions League winners Real Madrid, David Beckham scored a beautiful goal that saw him combine both his dribbling skills and his trademark bend to smash it home.

David Beckham helped secure England’s road to the Germany 2006 World Cup with a blast over the Wales goalie in the top right shelf to make it 2 nil. Upon receiving a pass from Paul Scholes, Beckham sets himself up with two dribbles before sending it home.

In a Premier League match against West Ham, David Beckham one-times a chip just over the goalie and into the back of the net. He somehow makes the placement look so simple.

In what was to be his last season with the Red Devils, Beckham scored a beautiful curler into the top right corner of the net. Iker Casillas barely flinched. Beckham signed for Los Blancos in 2003 where he continued his set-piece magic.

In a 1996/97 Premier League match between Manchester United and Spurs, Beckham scores yet another beauty outside the box. About 44 yards out, he bends the ball above and beyond the goalie’s bear claws.

In his first year as a Real Madrid Galactico, David Beckham ripped a shot into the bottom left corner passed the Malaga goalkeeper who could only sit and watch. The powerful placement gave Real fans a taste of what was to come.

David Beckham inspired the Red Devils team to victory in a 2001/02 Champions League quarterfinal match against Deportivo. His wonder strike in the 15th minute was the start of a 2-0 victory. Manchester United also won the second leg, before bowing out to Leverkusen in the semifinals.

This particular free-kick raised the roof at Old Trafford as it gave Manchester United the 3-2 lead. The 1998/99 season was arguably David Beckham’s best year at Manchester United. He helped guide the Red Devils to the Treble, including a Champions League trophy, a league victory, and an FA Cup.

With his unbeatable right foot, David Beckham sent this free-kick into the top left corner, nicking the bar before bouncing into the net. Goalkeeper David James barely got a move on it.