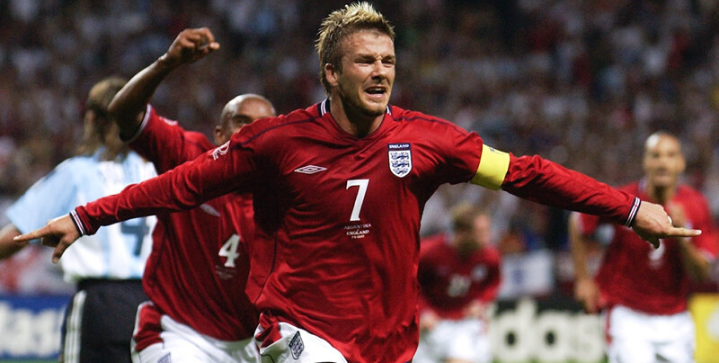 He could bend the ball into any corner of the net. More than half of the 65 goals David Beckham scored for club and country in his two-decade career came from set pieces. From the strike that guaranteed England’s World Cup spot to the handful of thunderbolts at Manchester United, here’s a list of some of our favorites.

One of David Beckham’s best and most important goals came on his old stomping grounds at Old Trafford. With England down 2-1 to Greece, the Three Lions needed a dose of magic. So what better than the bend it aficionado himself to seal the tie with a beauty of a kick to send England to the 2002 World Cup. Glorious.

From a nearly impossible angle 30 yards out, Beckham swung in the ball near-post to put the Galaxy up 4-1 over Kansas City in the MLS Cup. The goal was part of his last season in the MLS, a five-year career that saw him win two MLS Cups and two Supporters’ Shield.

In what was to be his last season with the Red Devils, Beckham scored a beautiful curler into the top right corner of the net. Iker Casillas barely flinched. Beckham signed for Los Blancos in 2003 where he continued his set-piece magic.

In his first year as a Real Madrid Galactico, David Beckham ripped a shot into the bottom left corner passed the Malaga goalkeeper who could only sit and watch. The powerful placement gave Real fans a taste of what was to come.

This particular free-kick raised the roof at Old Trafford as it gave Manchester United the 3-2 lead. The 1998/99 season was arguably David Beckham’s best year at Manchester United. He helped guide the Red Devils to the Treble, including a Champions League trophy, a league victory, and an FA Cup.

With his unbeatable right foot, David Beckham sent this free-kick into the top left corner, nicking the bar before bouncing into the net. Goalkeeper David James barely got a move on it.

Sometimes it’s less about finesse and more about timing. Beckham took a quick-thinking free-kick against Blackburn to put the ball over Brad Friedel’s head to put the Red Devils up 2-1.

In his 300th appearance for the Red Devils, David Beckham scored his trademark free-kick against Fulham. Beckham’s 60th goal for the club, it had all the bend and pace to become a strike of perfection.

In a Premier League match against Aston Villa during the 1998/99 season, Beckham wound one up from 30 yards out to send a thunderbolt over the keeper into the top left post.

Scoring 90 seconds into the match against Man City, Beckham left the goalkeeper with a whiff of the ball as it whizzed by his gloves. Game, set, match.

In a Premier League match against Everton, Beckham smashed yet another one with an unpredictable curve into the left-hand corner of the net. The goalie can only gaze at the ball as Becks as Man United’s traveling fans up erupt at Everton.