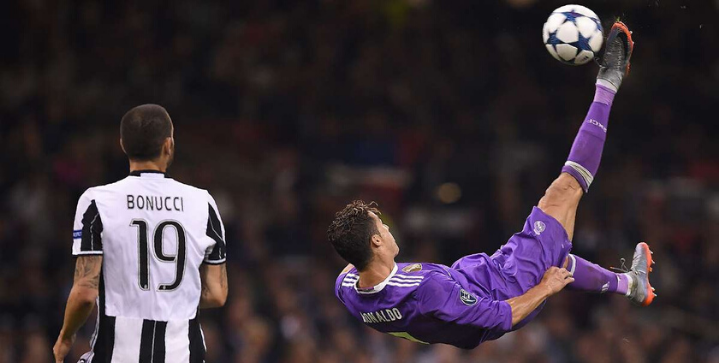 With over 700 goals and countless trophies in his illustrious career, Portuguese forward Cristiano Ronaldo is undoubtedly one of the greatest of all time. But which goals were his best? These are are the top eleven goals that be featured in highlight reels for years to come.

In what was Ronaldo’s 119th Champions League goal in his career, he scored a jaw-dropping bicycle kick in the first leg of the Champions League quarterfinals against Juventus in Turin. Zidane, the master of his own bicycle against Bayern Leverkusen in the Champions League final called Ronaldo’s strike “one of the best goals in history.” Ronaldo The Juventus fans applauded the extraordinary strike, made even sweeter now that Ronaldo plays for the La Vecchia Signora.

Talk about a hit! In a quarterfinal second leg match against Porto, Ronaldo sends a scorcher into the goal from 40 yards out. The wonder goal helped push United on to the next round and onto its way to winning the tournament as part of the team’s Premier League title that year. Meanwhile, Real Madrid must have been chomping at the bit to sign Ronaldo as soon as possible.

Ronaldo stole the show in a World Cup qualifying match between Portugal and Sweden by scoring a hat-trick to ensure his country’s participation in World Cup 2014. While all of his goals were brilliant, it was Ronaldo’s game-winning goal in the 78th minute that was the most thrilling. Receiving a pinpoint pass from teammate Joao Moutinho, Ronaldo used his speed to dribble the ball around the goalie before smashing it at an impossible angle beyond Sweden’s reach.

In yet another display of the Ronaldo’s shot power, he fired an incredible ball from the left side of the field over goalie Atletico goalie Thibaut Courtois and tucked it into the upper right-hand corner of the net. Absolutely deadly. Ronaldo scored a hat trick on the day and propelled his team to La Liga champions.

A 68th-minute header from a skying Cristiano Ronaldo over Dani Alves sealed the Copa Del Rey for Los Blancos against arch-rivals Barcelona. The win stymied the Catalan giants led by the indomitable Pep Guardiola from winning the Treble. The victory also signaled a shift in the competitive landscape between the two teams.

With four players surrounding the Portuguese striker, Ronaldo flicks it to James Rodriguez and continues his run toward goal, one-timing the Rodriguez return pass into the back of the net. Sublime set up and finish.

Saving his national side yet again, Ronaldo helped Portugal to advance to the knockout round of the Euro 2016 tournament when he equalized the score with a magical backheel flick. Portugal went on to win the tournament.

Despite a 659-minute drought of goals in European competition, Ronaldo only needed a hat trick against La Liga rivals Atletico to quiet his critics and help his team advance in the Champions League. Of course, we all know what happened next. Ronaldo would score the bicycle against Juventus en route to winning his fifth Champions League trophy.

Of course, the list wouldn’t be complete without including one of Ronaldo’s master strikes from his Manchester United days. This dip of a free kick in a Premier League match against Portsmouth was a real screamer. Standing from 35 yards out, he blasts a knuckleball beyond the reach of David James. The goal sent Manchester United atop the table.

In another unimaginable goal, Ronaldo used his back heel to karate kick a goal into the back of the net to equalize against Valencia in the 95th minute.

In a dashing display of Ronaldo’s vicious skills, he out dribbles three Espanyol opponents before smashing in a goal with his left boot. Los Blancos won the game six nil.