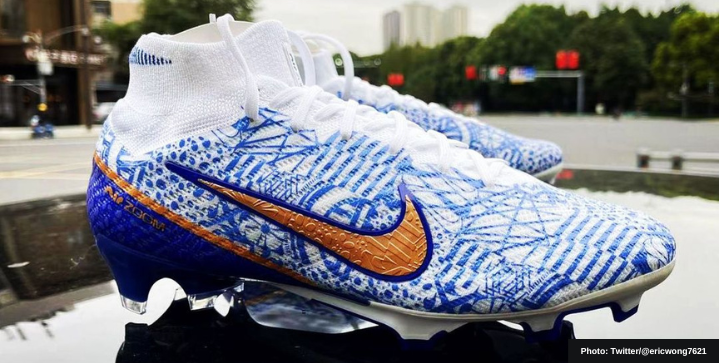 It appears that Ronaldo’s new Nike Mercurial 2022 signature boots have leaked. That’s according to reputable boot enthusiast @EricWong7621 on Instagram.

The new Zoom Mercurial CR7 2022 boots could be the striker’s boot of choice at the World Cup Qatar.

The predominantly white cleat features a swoosh decorated in metallic copper combined with a light blue pattern, although the heel adopts a bolder concord blue.

The Portuguese legend might have to employ some ankle tape, though, although the boot appears to include Nike’s patented elasticated Flyknit and Vaporposite technology in the upper.

There’s the possibility that Ronaldo could also suit up in the wildly popular Nike Zoom Mercurial Superfly 9 — the boot he wears now with the Zoom airbag — shrouded in a metallic copper.

The Zoom Mercurial CR7 2022 boots get their official release on October 31st.