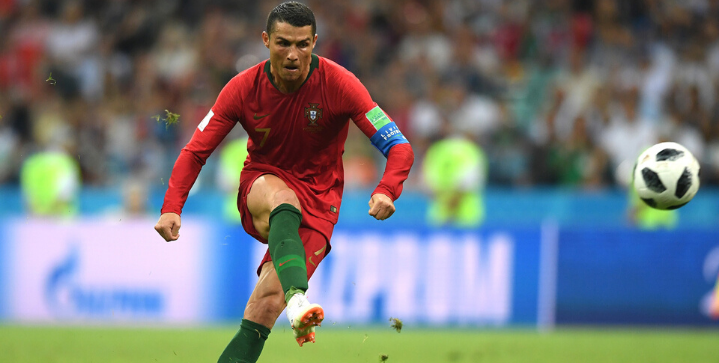 With 154 appearances and 85 goals, Cristiano Ronaldo holds the record for most caps and goals for Portugal’s national team. He’s also the second top international goalscorer of all-time. In this post, we’ll highlight CR7’s top goals for the national side.

Ronaldo stole the show in a World Cup qualifying match between Portugal and Sweden by scoring a hat-trick to ensure his country’s participation in World Cup 2014. While all of his goals were brilliant, it was Ronaldo’s game-winning goal in the 78th minute that was the most thrilling. Receiving a pinpoint pass from teammate Joao Moutinho, Ronaldo used his speed to dribble the ball around the goalie before smashing it at an impossible angle beyond Sweden’s reach.

Saving his national side yet again, Ronaldo helped Portugal to advance to the knockout round of the Euro 2016 tournament when he equalized the score with a magical backheel flick. Portugal went on to win the tournament.

Nearly a year after his backheel flick against Hungary in the Euros, Ronaldo picked on Hungary again — this time in a World Cup qualifier. In his first goal, he picks up a nifty drop pass from teammate André Silva and deftly fires the shot low into the left corner of the net.

Ronaldo’s second goal was trademark Ronaldo — a free-kick knuckleball that rounds the Hungary wall and bounces with pace into the right side of the net beyond the goalie’s claws.

In the Euro 2016 semi-finals against Wales, Ronaldo scored a wonderful header early in the second half to put his team up one nil. His spring is tremendous, as he hangs in the air waiting for the ball to drop and pinpoints a forceful header into the top right side of the goal.

In a Group B match between Portugal and Spain, Ronaldo fired a pacy knuckleball past David de Gea into the back of the net. The goal gave Ronaldo his 51st career hat trick and also represented the 51st hat-trick in World Cup history. His first goal made him one of four players to score in four different World Cups.

In an international friendly against Ecuador, Ronaldo reinterprets one of his trademark moves — the chop — by using the same foot to volley the ball to himself before making a powerful shot in the right side of the net. The goalie had zero chance.

Ronaldo scored a screamer against Armenia to complete his hat-trick in what was his third international hat-trick of all-time. Trapping the ball down about 40 yards from goal, he takes two quick touches and sends the ball slinging into the goal.

From 33 yards out, Ronaldo hammered one against Denmark in a 2011 Euro Qualifier. With incredible pace and venom, it’s no wonder Ronaldo developed a reputation as one of the most feared free-kick takers. This is precisely

In a 2016 World Cup qualifier against Latvia, Ronaldo patiently waits for a mid-volley before hammering it home. Poise, power, and technique — the goal had it all.

Go hard or go home. In a must-win game for Portugal in order to secure the 2012 Euro qualification, Ronaldo laces a free-kick from 40 yards out dead smack into the goal. The ball sinks ever so perfectly right at the goal line.