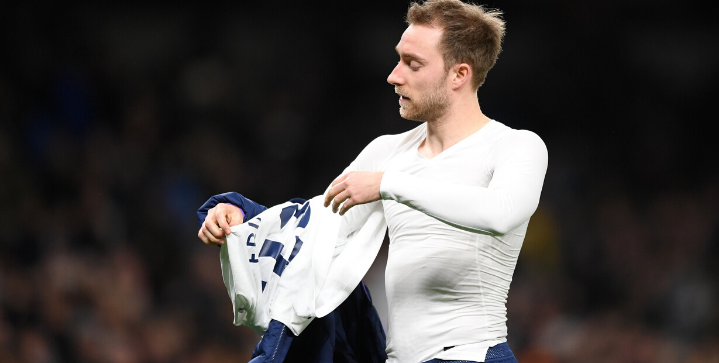 Inter Milan have reached an agreement with Tottenham for the £17.5 million transfer of Christian Eriksen.

Ajax, Eriksen’s previous club, is expected to receive 10 percent of the fee as part of the deal. The midfielder is expected to earn £320,000 per week.

Eriksen could be seen completing his medical today at CONI centre in Milan.

View from inside CONI: Eriksen is taking a quick selfie with his new fans. #EriksenDay pic.twitter.com/ltBONc49Md

“You all know that we are negotiating with Tottenham. I am optimistic and I hope everything can be concluded quickly because the market closes on Friday and we hope to conclude the negotiations in the next few days,” said Inter Milan CEO Giuseppe Marotta.

The Danish playmaker will leave after six years with Spurs where he scored 69 goals and provided 89 assists in 304 appearances.

The 27-year-old attacking midfielder moved to North London in 2013 for £11 million after blossoming at Ajax.

Eriksen has been looking for an exit since Tottenham’s miraculous Champions League runner-up last season. But he won’t get the dream move to the Santiago Bernabeu, as he previously hoped.

“I feel that I am at a stage of my career where I would like to try something new,” admitted the Denmark international last summer.

“I hope that something will be decided this summer. That is the plan. Real Madrid is a step up but it would take them picking up the phone and saying that they want me.”

Christian Eriksen has landed in Milan ahead of completing his move to Inter. pic.twitter.com/m7dAsTSwgU

Conte adds another Premier League star to his roster

Conte has made acquisitions of red-hot Romelu Lukaku, Alexis Sanchez, and most recently Ashley Young and Victor Moses. Chelsea’s Oliver Giroud has also been targeted for a move this January.

Adding 27-year-old Eriksen to the mix will inject creativity into the midfield and give Conte’s side a vital dead-ball specialist.

How Mourinho plans to replace the Danish Maestro is yet to be seen but Manchester United’s dead deal for Sporting Lisbon playmaker Bruno Fernandes appears to have Spurs fans talking.

The rise of 23-year-old Giovani Lo Celso has also eased the loss of Eriksen. Tottenham can sign the Argentine on a permanent deal from Real Betis this January for £27 million.