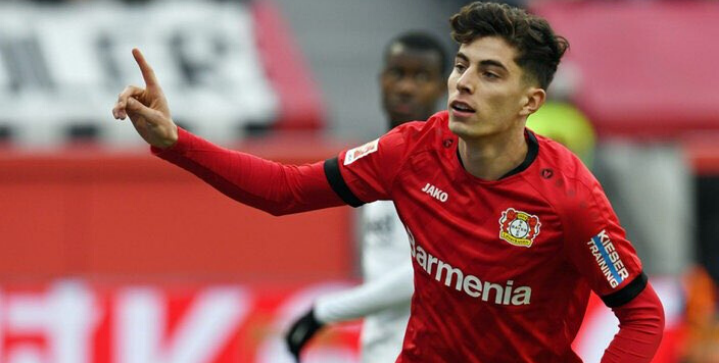 With Jadon Sancho heavily linked with Manchester United at £120 million, Chelsea have shifted their attention to another Bundesliga playmaker, Kai Havertz.

The Blues are showing “serious” intent to sign the 20-year-old Bayer Leverkusen sensation.

But it won’t be easy.

The versatile German player has 15 goals and 8 assists to his name in all 38 competitions to his season.

Chelsea may also face La Liga giants Real Madrid in the race to sign Havertz. Real Madrid is Kavertz’s dream club, with ambitions to follow in the footsteps of fellow countryman Toni Kroos.

“Many clubs are interested in him. Kai has been with us for ten years. I see the player’s wish to take the next step sometime in the near future,” said Leverkusen director Fernando Carro.

The London club have already signed Moroccan attacking midfielder Hakim Ziyech from Ajax. The club has also agreed to personal terms with RB Leipzig striker Timo Werner in a deal worth €60M.

Lampard is also keen to strengthen his defensive line in the summer transfer market with eyes set on Leicester’s left-back Ben Chilwell.

The prospect of both Werner and Havertz joining Chelsea gives The Blues a dynamic attacking core that includes Christian Pulisic, Hakim Ziyech, and Callum Hudson-Odoi.

Is Kai Havertz the right signing for Chelsea? Let us know on Facebook.