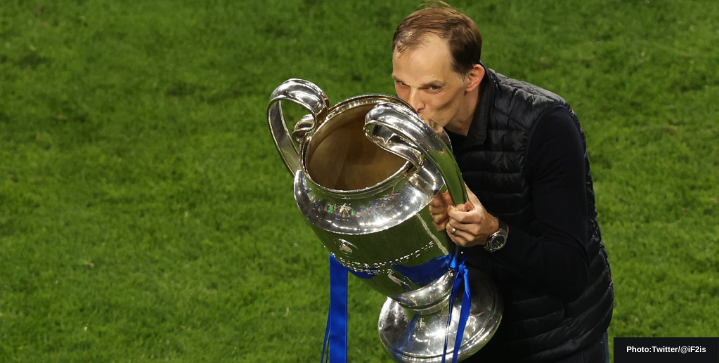 Thomas Tuchel has signed a two-year contract extension with Chelsea until June 2024.

The long-term deal comes as no surprise given that the German manager delivered the Blues the club’s first Champions League trophy since the 2011/12 season.

“I can assure Roman that I’ll stay hungry. I want the next title. I feel absolutely happy as a part of a really ambitious club that suits my beliefs and passion about football perfectly,” said Tuchel on his contract extension.

“I can’t imagine a better occasion for a contract renewal. I’m grateful for the experience and very happy to stay part of the Chelsea family. There is far more to come and we are looking forward to our next steps with ambition and much anticipation.”

The German boss has racked up some impressive statistics since replacing Frank Lampard last January.

For one, Tuchel took the Blues from ninth place in the Premier League to finishing fourth. Tuchel is the only manager to beat Pep Guardiola in a UCL final; he’s also won all three of his matches against the Spaniard since joining the Blues.

Tuchel’s only slip-up so far has been the defeat to Leicester City in the FA Cup final.

Here are some of Tuchel’s other impressive exploits at Chelsea:

Overall, Tuchel has recorded 19 wins, 5 losses, in 30 games. Winning the Champions League in less than five months in charge was icing on the cake.

Now that Chelsea has extended a contract to one of the world’s best coaches, the next test will be if Tuchel can see out three more seasons. All the right conditions appear to be in place.

Abramovich has guaranteed Tuchel a £200m war chest for summer transfers. Silva’s contract has also been extended, and Chelsea is already linked with Erling Haaland and Declan Rice this summer.

Things at Chelsea are only heating up.