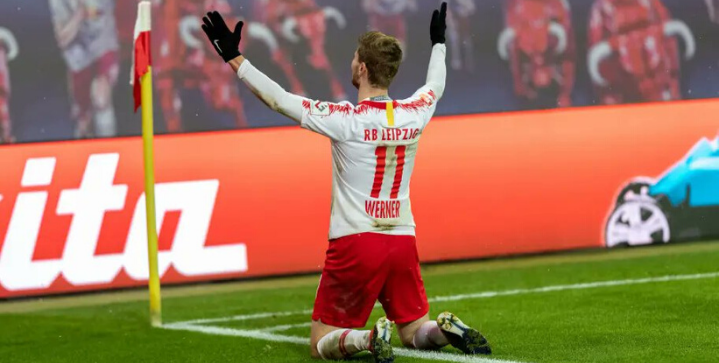 Time Werner is on the verge of joining Chelsea in a deal worth €60M, reports BILD Sport.

The five-year contract, worth €10 million a year, keeps Werner at Stamford Bridge until 2025.

The latest transfer news comes as a shock given Werner’s close links with Jurgen Klopp and admiration for Anfield.

The highly touted RB Leipzig striker has been heavily linked with a move to Liverpool for the past six months.

“Liverpool are the best team in the world at the moment, and when you’re linked with them, it makes me very proud,” Werner said in February.

Chelsea look to sign the right players at the right time

Chelsea boss Frank Lampard is keen to snatch one from the Reds, a team he wants to emulate in the transfer market.

“As part of their journey, they have signed the right players at the right times; ones that feel pivotal,” Lampard told the media in March.

“Virgil van Dijk, Alisson – they have a great knack of signing players that suit the way they want to play and help them keep moving forward.

“It’s a great model in those terms but I don’t want to look anywhere near like I’m comparing us now.

“I’m under no illusions about that but what I do understand is that behind their story can be attributed to the hard work that they have been prepared to do.”

Lampard and Chelsea technical and performance advisor Petr Cech made an unannounced pre-lockdown trip to Germany that helped convince Timo Werner to move to Stamford Bridge.

In another win for the Blues, Liverpool revealed that the club can’t meet Werner’s current valuation, instead prioritizing new contracts for the club’s existing players. Liverpool have also dropped interest in a deal for Napoli central defender Kalidou Koulibaly.

Chelsea may have ultimately tempted Werner with more regular playing time. The player previously admitted that “there is no space for me to play” on Liverpool.

The 24-year-old German goal machine has notched 75 strikes and 22 assists (97 mins per goal/assist) in 122 Bundesliga games.

Is Timo Werner the right signing for Chelsea at this time? Let us know on Facebook.