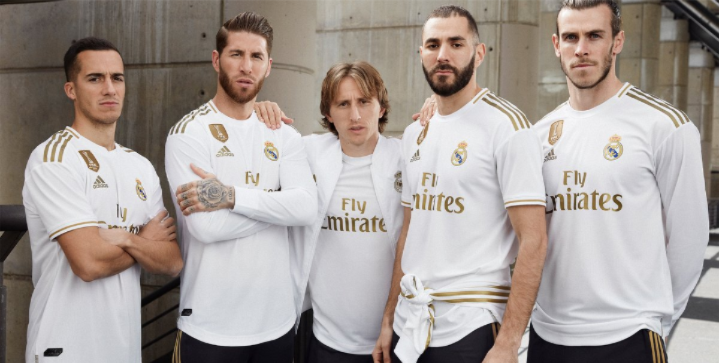 While we all wait for the official announcement of Eden Hazard’s arrival at the Santiago Bernabeu, let’s take a look at the kit he’ll be wearing next season.

Madrid’s new Real Madrid home shirt pays tribute to the royal golden crown above the badge that the club adopted along with the “Real” title in 1920.

The white colorway and gold accents on the round collar, cuffs, Adidas three stripes, and sponsor give the shirt a wholesome design. As Footy Headlines notes, Real’s proprietary font treatment is a modern take on the geometric styles seen in the 1994 World Cup.

It’s worth noting that Real will only wear these fresh kits for Champions League and Copa del Rey matches as La Liga requires all teams to use the same font.

The new kit is classy and clean, the style we’ve come to expect from the Spanish giants, but which of the stars (re: Gareth Bale) featured in the promo will still be wearing it next year?

You can view more images of the kit on the Real Madrid official website.