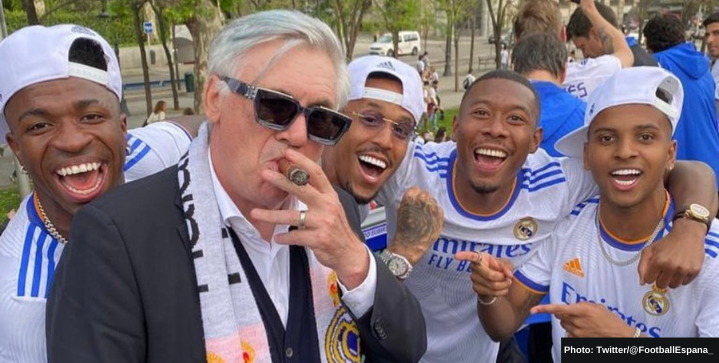 The legendary Italian manager Carlo Ancelotti has won a breadth of titles across Europe’s top leagues, including the Serie A, La Liga, Bundesliga, and the Premier League. He’s also one of three managers to have won the UEFA Champions League three times and the only man in history to manage five Champions League finals.

Did we mention that he’s also the first manager in history to reach the UCL semi-finals across four decades? And that he and Sir Alex Ferguson are the only two managers to achieve 100 plus Champions League wins?

Carlo Ancelotti worked wonders upon his return to Real Madrid during the 2021-22 season. By winning La Liga — previously his only missing major domestic trophy — the Italian became the first coach in history to win five major European league titles.

Don Carlo’s record of success is undeniable — the 62-year-old is still a calm, eye-brow-raised winner. Now, he’s on the brink of becoming the first-ever manager to win the Champions League four times.

In his first year as the head coach of Real Madrid, Ancelotti defeated crosstown rivals Atlético Madrid 4-1 to lead Los Blancos to the Décima. It was the club’s 10th European championship and their first since 2002.

Despite finishing third in the league after Barcelona and Atlético Madrid, Ancelotti still managed to win his first trophy. In a match against rivals Barcelona in April 2014, Real Madrid won 2-1 with Angel Di Maria and Gareth Bal scoring goals.

In a 2003 Champions League final against Italian heavyweights AC Milan and Juventus, it was Ancelotti’s side that pulled out on top in penalties. The Ukrainian footballer Andriy Shevchenko netted the last goal to seal the deal for the Rossoneri. Milan earned their European Cup for the sixth time.

It would be another three years before Ancelotti led his AC Milan side to yet another Champions League trophy. They had lost the final two years before on penalties against Liverpool in Istanbul. There was no way Ancelotti would let history repeat itself in the 2006-07 rematch between the two sides. Led by two goals from AC Milan striker Filippo “Pippo” Inzaghi, Milan beat the Reds 2-1. The win gave Ancelotti his second Champions League trophy.

In the 2003-04 season, Ancelotti led the side to its 17th Scudetto. Andriy Shevchenko scored 24 goals in the season, bolstered by the arrival of Kaka and a solid defensive back-line spearheaded by Paolo Maldini.

The team set a Serie A record with 82 points in 34 games, losing twice and finishing 11 points clear of Roma.

In his second season with the club, Ancelotti defeated Roma on an aggregate score of 6-3 to win the Coppa Italia Final. It was the Rossoneri’s fifth title.

With an 8-0 smashing of Wigan, Ancelotti succeeded in winning the Premier League title with Chelsea in his first season with the club. The team also set a Premier League record with 103 goals in a season. Manchester United finished a mere point behind the Blues.

In 2010, Ancelotti won the double when he led Chelsea to its third FA Cup victory in four years. The Blues beat Portsmouth 1-0 off a Didier Drogba free-kick in the 58th minute.

With a 6-0 win against Wolfsburg, Ancelotti coached Bayern Munich to the team’s fifth consecutive title giving the Bavarian side 27 Bundesliga Championships in total.

In his second year in charge of Paris Saint-Germain, the Italian coach secured the league with two games left in the season. Unfortunately, this would be his only honor at PSG before moving to take over duties for Real Madrid.

Carlos Ancelotti added two Super Cup trophies while the boss of AC Milan, one in 2003 with a 1-0 over Porto and another in 2007 with a 3-1 win over Sevilla.