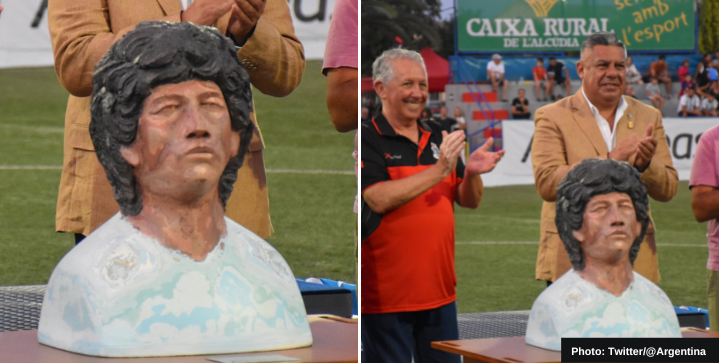 On Tuesday, Argentina and Spanish football officials unveiled a new statue of Diego Maradona in Spain.

AFA president Chiqui Tapia revealed the bust by local artist Rafa Ferri at the COTIF international U-20 youth football competition. And just like other footballer statues before it (Ronaldo‘s Madeira Airport statue, Aguero’s Etihad, et al.), the online response has been mixed.

There are many statues dedicated to the late great Diego Maradona. After all, he’s a football legend. The Argentine’s “Hand of God” kit from the 1986 World Cup quarter-final match against England smashed the record for the most expensive jersey ever sold ($9.3 million) last May.

Nonetheless, the artwork, which features the player with his black perm and albiceleste shirt (oddly enough missing the stripes), divided social media opinion.

“Looks like he’s eaten his 2 and 3rd breakfasts,” responded one Redditor.

“Looks pretty accurate if he designed it after what he currently looks like,” said another.

Other comments were more kind.

“It’s definitely stylistically designed to be this way. Not every statue / bust must look life-like. It could look a bit more like him, though. And I personally don’t dig that it looks like Papier-mâché.”

Love it or hate it, the newest Maradona statue will now welcome players and fans to the COTIF tournament at the Els Arcs stadium in Valencia every year.