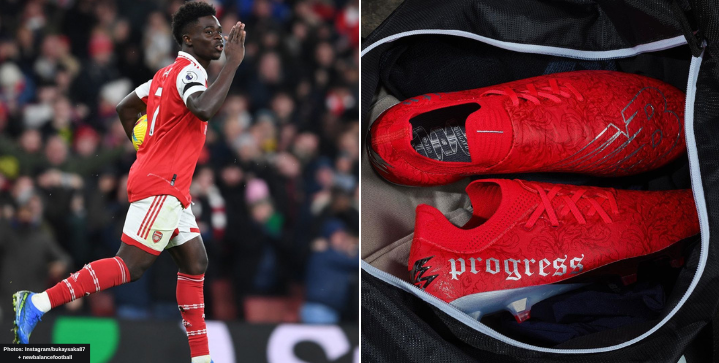 “I am so proud to have grown up in Ealing,” said the 21-year-old England international.

“Everyone from West knows what it means to represent our side of London, it’s a special feeling. It feels unreal to have a boot that so many people will be able to relate to, it truly is a dream come true.”

The signature cleat represents the player’s journey from the pitches of Brentside and Greenford High to an elite Arsenal player.

In July 2001, Saka became the youngest-ever recipient of the Freedom of the Borough for his courage shown at Euro 2020. Saka, along with Marcus Rashford and Jadon Sancho, received racial abuse after missing penalty kicks in the 3-2 shootout defeat to Italy at Wembley.

With his first boot, Bukayo Saka joins the list of New Balance ambassadors Sadio Mane and Raheem Sterling, who have all released signature boots with New Balance in the past.

Fans of Arsenal and of Saka can rep the 21-year-old player in style with this unique footwear when the boot drops online starting January 19.