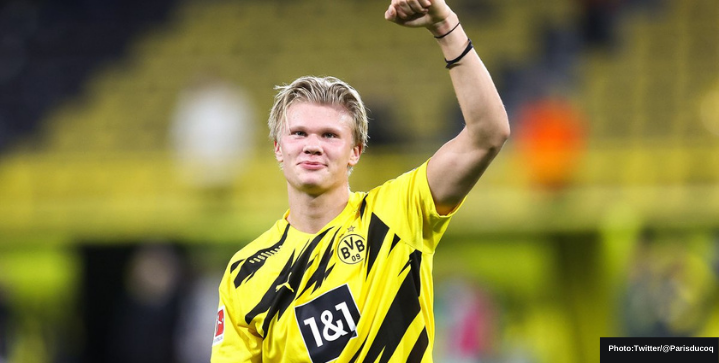 Borussia Dortmund have placed an exit price on Erling Haaland and it’s a doozy.

The official price tag is a whopping €180 million ($212M), according to ESPN. That is more than double his valuation last season.

Not many teams can afford such a high transfer fee, with only a handful of clubs including Manchester City, Man United, Chelsea, Barcelona, Real Madrid, and Bayern Munich with realistic intentions.

Dortmund hope that the valuation sends a warning to any of the European heavyweights making a bid. The club took a similar preemptive approach last year with Jadon Sancho, slapping a €120 million transfer fee demand on the star winger.

Is Haaland worth every penny?

Arguably the best striker on the market — certainly the youngest at 20-years-old — Haaland has scored a remarkable 33 goals and 8 assists in 31 competitions this season. Ten of those goals appeared in the Champions League, where Haaland will lead his team against Manchester City in the quarter-finals next month.

His brace against Sevilla in the second leg of Round of 16 saw him become the fastest and youngest player to reach 20 Champions League goals.

Stat merchant Haaland goes hand in hand with his astronomical sum of a valuation. He’s quite simply a game-changer and now one of the world’s greatest economic bets. La Liga president Javier Tebas admits that Barcelona and Real Madrid will need ‘a magic trick’ to sign Haaland or Mbappe this summer.