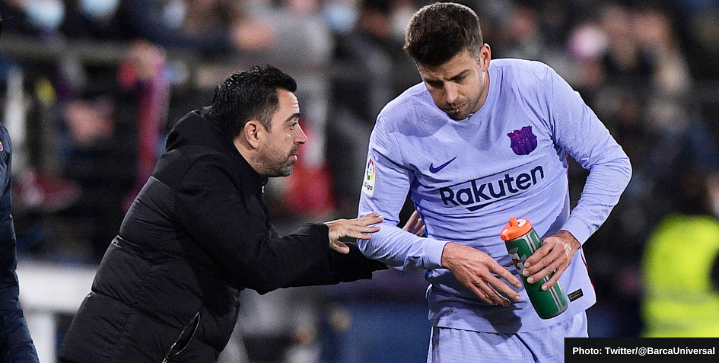 Xavi has advised Gerard Pique that he’s surplus goods at Barcelona and is no longer needed at the club due to his “unprofessional conduct.”

According to Spanish outlet Sport.es, the two former Barca teammates discussed Pique’s future two weeks ago. Head coach Xavi is said to have taken issue with the 35-year-old’s various business ventures, including Kosmos Holding, which owns the TV rights to Ligue 1 and Ligue 2 in Spain. The company televised Messi’s PSG debut against Reims last season to much fanfare.

35-year-old Pique still has two years left on his contract with €50M owed to the player in deferred salary. However, the two parties could settle on a reduced amount to move things forward as done with previous Barca captain Carles Puyol.

Barca fans, should Pique stay at Camp Nou and fight for his spot?

Walls coming down for Pique

The Spaniard has become one of the club’s most influential figures, returning to Barcelona in 2008 from Manchester United. Pique started his career at Barcelona’s famous youth set-up, La Masia, in 1997 before signing for the Red Devils in 2004.

But after 602 appearances with the Blaugrana, the 8-time La Liga champion and three-time Champions League winner is facing an uncertain future. His high salary, repeated injuries, and off-the-field behavior have become permanent distractions.

Xavi reportedly told Pique that the center-back is not part of his plans for the upcoming season. Barcelona is looking to inject some youth into their backline by signing 23-year-old Sevilla standout Jules Kounde. The Frenchman is also on Chelsea and Real Madrid’s radar for a hefty release clause of €80m.

The last couple of weeks has been a rollercoaster for Barca veteran Pique. Shakira, Pique’s partner for 11 years, caught the Spaniard cheating and filed for separation. And now Pique, should he stay at Camp Nou, will face an uphill battle in fighting for a spot in Xavi’s youth-filled squad.

Las Vegas to host the first Clasico of next season