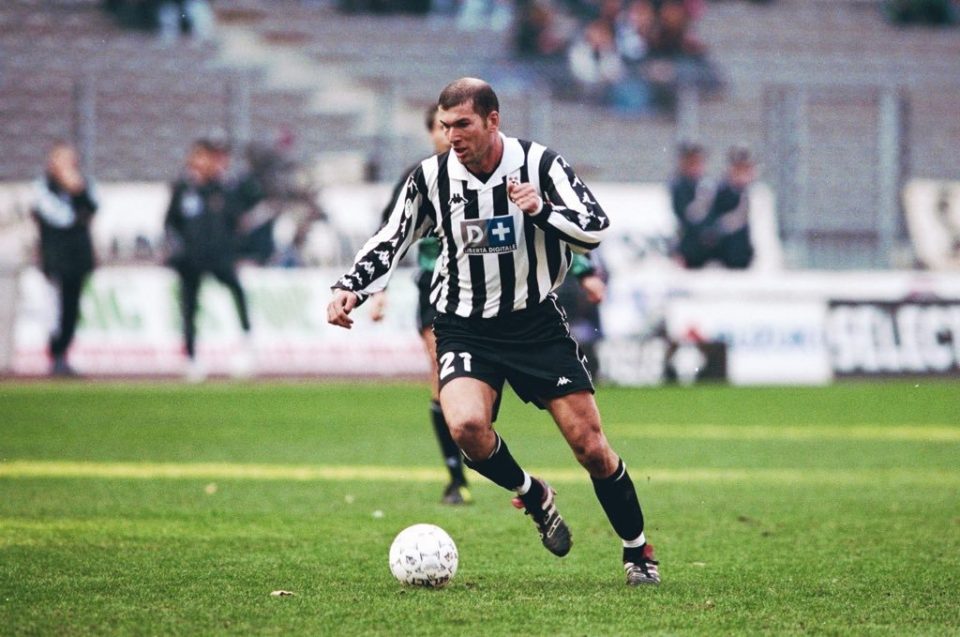 The 1990s witnessed some of the most amazing talents in world football, especially from Barcelona’s ‘Dream Team’ and the predominant AC Milan side. In this post, we recap some of the best players of that decade.

The midfielder technician started his professional career off in Bordeaux where in 1996, he won player of the year. The following season he suited up in the black and white stripes of Juventus, winning the Serie A twice in his first two years with the club. He also helped lead the team to back-to-back Champions League finals, both losing efforts. However, he’d go on and win the World Cup and the Ballon d’Or in the summer of 1998.

After starring at Fiorentina in the late 80s, Baggio moved on to rivals Juventus in 1990 where he continued his magic display. The prolific goal-scorer nailed 78 goals in 141 matches in Turin over 5 years, winning both the UEFA Cup and the Ballon d’Or in 1993. Despite his greatness, he missed out on a Champions League trophy and most famously, missed a penalty that gave Brazil the World Cup in 1994.

Regarded as one of the greatest footballers of all time in the 1980s, Marco van Basten continued that streak well into the 90s. He played 6 years for the Rossoneri bowing out with 201 domestic league appearances and 124 goals to his name. During his time at the San Siro, he won the 1992 Ballon d’Or, a pair of European Cups, 3 Italian Cups, and was a 2-time UEFA Supercup winner.

A clinical finisher, George Weah or King George as he became to be known, won the 1995 Ballon d’Or for his excellent display at Paris Saint Germain where he finished a league-winner and the top scorer in the Champions League. After moving to AC Milan, the center-forward packed in two league titles in his 5 years at the San Siro where he earned 114 domestic league appearances and scored nearly 50 goals.

Considered one of the best defenders of all-time, Paulo Maldini finished third for the Ballon d’Or twice, once in 1994 and a second time 9 years later. The one-club Italian was remarkably consistent, captaining AC Milan to 5 Champions League trophies and 7 league titles in 14 historic years with AC Milan.

Alessandro Del Piero aka ‘Mr. Juventus’, helped the Turin side win a total of three league titles in the 90s (he’d win five more the following decade) and a 1996 Champions League trophy. A creative attacker who donned the number 10 following in the footsteps of Platini and Baggio, Del Piero was made a Ballon d’Or finalist each year from 1995 – 1999. He earned 705 appearances with the club, scoring 290 goals for the black and white.

One of the best goalkeepers of all-time, the ‘Great Dane’ Peter Schmeichel powered the Manchester United side. With an imperious goal presence and quick reflexes, Schmeichel won a Champions League, five Premiership titles, three FA Cups, and a League Cup during his eight your spell with the Red Devils.

A successful crossover from the 80s, Italian defender Franco Baresi captained his AC Milan side to four consecutive Italian League titles in the 1990s, including three Super Cups, and a Champions League trophy in 1994. He also helped guide Italy to its 1982 World Cup with a third-place finish in 1990 and a runner-up in 1994.

The 80s superstar versatile midfielder continued his club success in the early 1990s in the red and black at AC Milan. After picking up a 1987 Ballon d’Or and filling his trophy case with three Serie A titles and two European Cups with AC Milan, he helped Chelsea as player-manager win an FA Cup 1996, its first significant title in 26 years.