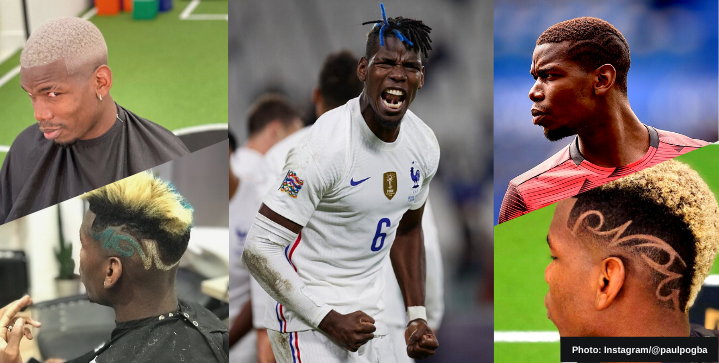 The French midfielder Paul Pogba is known for sporting some of the most creative hairstyles in world football. He even has a personal barber that flies around the world just to give Pogba the latest chop. Here are our favorite Pogba hairdos of all-time.

After winning France’s second World Cup trophy in Russia, Paul Pogba put two stars in the back of his head. He just had to.

In 2015, Paul Pogba showed up to national team training with some peroxide-powered musical notes sketched into his shaved head. That’s one way to attract attention.

In preparation for Euro 2015, Pogba went extra patriotic and got The Gallic Rooster, one of the national emblems of France, shaved into his head. He left the other side for personal branding, no other than the words POGBOOM!

Pogba’s latest Red Devils efforts go for the half and half look, mixing in red, orange, and blonde. Pogba has a personal barber he apparently flies around the world so stay tuned to Instagram for his next look.

What do you do if you really love a comic book? If you’re Paul Pogba, you sketch the Batman symbol into your head. With the blonde-streaked fro-hawk on top, we have to say it all meshed well with the Juventus kit.

In this world of personal branding, there’s only one way to stand out: be different. Pogba took a more subtle tone with this haircut by simply adding his initials in lime green. Snazzy.

He must have been a 90s kid. Pogba etched the Pokemon character into his head while playing for Juventus in 2016. Given that he returned to Manchester United, perhaps he was the one who was finally caught.

Well, fast and agile is part of his game. Pogba raised eyebrows when he shaved the gold-spotted skin of the leopard into the side of his head. Let’s just say Juventus went on an 11-0 win streak after the fact.

While most people thought he dyed the ‘dab’ into his hair as an extension of the goal-scoring dab celebration style, it was also a nod to his favorite British candy: the ‘dib-dab’ sherbert.

Never to shy to try something new, Pogba turned one half of his mohawk blue while keeping the other blonde. Oddly enough, he did before the Manchester derby where Manchester City dons the distinguishable sky blue colors.

The best design is no design? Back in his first run with Manchester United, Paul Pogba kept his hair normal. Five years later upon his second tenure with the club, he’d celebrate the signing by getting the Manchester United devil logo shaved into his head. How things change…