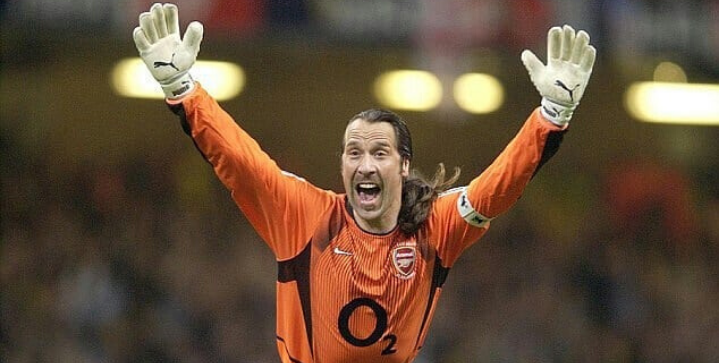 The last man of defense — teams can’t have much success without a dependable goalie. Here are the standout goalies of the 1990s.

An 8-time German Champion along with six DFB cups, a UEFA Cup, and Champions League trophy to his name, 6’2 Oliver Kahn aka ‘Der Titan’ holds the record for Bayern Munich club appearances at 632. He’s also the only goalkeeper to ever win the Golden Ball at the FIFA World Cup where he led his team to second and third place finishes.

The bald goalkeeper protected the goal posts for the World Cup winners France in 1998, as well as the Euro 2000. Although standing only 5 foot 11, he made up for his lack of height with insane acrobatics and the ability to lead from the back. Barthez also steered a victorious Marseille to the 1992/93 UEFA Champions League.

Once the most expensive goalkeeper in the Premier League with his £2.4m transfer fee to Blackburn Rovers in 1993, the English goalie finished runner-up in the league his inaugural season but won the league in the 1994/95 season. He also earned 11 caps for the England national side.

Once setting the highest transfer fee for a goalie in the Premier League, Nigel Martyn signed to Crystal Palace from Blackburn Rovers in 1989 for £1m. The strong goalie also starred for Leeds where he was named to the PFA Team of the Year in two consecutive seasons from 1997 – 1999 and helped Leeds to the semifinals of the Champions League. He also made 23 appearances for the England side.

The first goalie to ever keep a clean sheet in a World Cup final, German goalkeeper Bodo Illgner went on to enjoy similar success at the club level. His honors include two Champions Leagues and La Liga for Real Madrid.

The former record holder for most Premier League clean sheets with 169, English goalkeeper David James appeared in over 572 matches in his professional career. At the club level, he won a Football League Cup with Liverpool and an FA Cup with Portsmouth.

The Welsh shot-stopper Neville Southall made 750 appearances between the Football League and Premier League, helping the Everton side win a trove of FA Cup and First Division titles plus a European Cup Winners’ Cup. He also made the PFA Team of the Year four times and earned 92 caps for the Wales national side.

Named US soccer athlete of the year three times and praised for his longevity, the American goalie Kasey Keller enjoyed a string of international and club performances. He started in three World Cups, becoming the second most capped US goalie of all time. He also helped Leicester City its 1996/97 Football League Cup after making 176 appearances for Millwall.