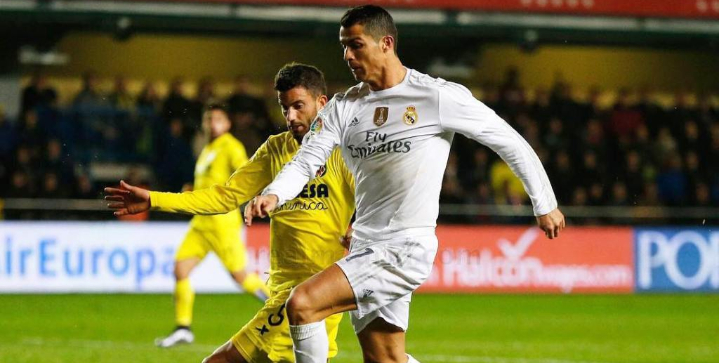 It’s hard to think of anyone better at the forward/striker position than Lionel Messi and Cristiano Ronaldo. But besides the two megastars vacuuming up goals and trophies, there’s been plenty of other great forwards with remarkable scoring records as well.

The golden boy Ronaldo has torched the opposition over the last eights years, netting a goal per game with 450 strikes in 438 appearances for the Real Madrid side. A four-time Champions League winner, a two-time Spanish league champ, the five-time Ballon d’Or winner is still one of the greatest ever to play the game.

If you thought Luis Suarez starred at Liverpool, he’s been on an absolute tear at Barcelona. The hard-working and physical attacker has scored 113 goals in 137 La Liga appearances. On top of his prolific goal-scoring record, he’s won a Champions League, three La Liga titles, and is a three-time Spanish Cup winner with Barcelona. His other trophies include a Copa America win with Uruguay where he was named the player of the tournament.

While Neymar’s move to Paris St. Germain continues to be criticized by the football elite for its outrageous sum of money, his play on the field has been nothing but noteworthy. The Brazilian creative helped Barcelona win the treble twice where he scored 68 goals in 123 domestic appearances. In his first year with PSG, he’s scored 34 goals and bagged a French League trophy, a French Cup, and also a Trophée des Champions. Already a Confederations Cup and gold medal winner from the 2016 Summery Olympics, the World Cup is the only trophy to elude him.

Coming off a World Cup title for France in 2018, the 19-year old has also been instrumental in helping his club team Paris St. Germain win the French Cup and French League. Now in his second year, he’s already earned 62 caps and scored 23 times. With top-quality assured, the only question now will be where he ends up next, most probably Nou Camp or the Bernabeu.

Considered one of the best players to don the sky blue shirt, Sergio Aguero is the team’s record goalscorer with 146 Premiership goals. In his first year with the side, he famously scored the game-winning goal in the 94th minute to beat Queens Park Rangers and win the Premier League over Manchester United. With two Premier League titles and two League Cups under his belt, Aguero looks to add more his trophy vault this year.

Lewandowski is Bayern Munich’s top non-German scorer with over 100 goals, reaching the mark faster than any other foreigner. He once scored a Guinness World Record five goals in nine minutes in a 2015/16 match against Wolfsburg. With 159 goals in 208 appearances for Bayern and 103 goals in 187 games for Borussia Dortmund in the 2010 – 2014 seasons, it’s easy to see why Lewandowski is an obvious choice for this list.

The Argentine forward has scored over 50 goals for each of the teams he’s played this decade including Real Madrid, Napoli, and Juventus. He even broke the Serie A goal-scoring record by netting 36 league goals in the 2015/16 season. A decorated player, the Argentine has won La Liga three times, the Series A twice, and the Coppa Italia three times, two with Juventus.

The Welsh forward scored one of the most memorable goals in Champions League history — a bicycle kick which sealed the victory for Real Madrid against Liverpool in 2018. A four-time Champions League winner, he’s collected a Spanish league and cup trophy as well. With already 73 goals in 132 appearances for Los Blancos and the spotlight on him given the departure of Ronaldo, it’s Bale’s time to shine.

A tireless worker up front, the Uruguayan center forward who joined PSG in 2013 at a French-league record €64 million, has notched 171 goals to date. A 4-time French champion, a five-time French League Cup Winner and six-time Super Cup Winner, he’s also won the French league for the last five consecutive years. He also won the Coppa Italia with Napoli in 2011, where he appeared in 138 matches and scored 104 goals.

Although cut from the French national team that won the World Cup 2018 for off the field issues, Karim Benzema has been an absolute stud for Los Blancos. In his nine years and 422 caps with the club, the crafty and powerful forward has scored 197 goals. He’s also been part of the squads that have won four consecutive Champions League, two La Liga, and two Copa Del Rey.

The rise of Moise Kean, Italy’s next superstar