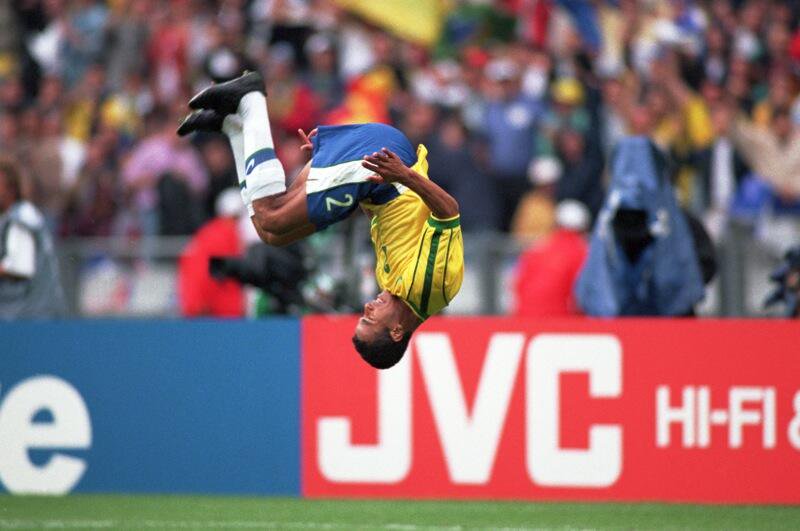 Trite but true: Defense wins championships. While not the sexiest position in the world, the best defensive players are both reliable walls and offensive catalysts. Here we present some of the best defenders of the 1990s.

The Brazilian defender played 527 times for Los Blancos, making his name as one of the best left-back in history. He also made a name for himself as a free-kick specialist, known for blasting rockets into the goal. Carlos finished his Real career winning four domestic league trophies and Champions League three times. With 125 appearances for the Seleção, Carlos also helped Brazil win the 2002 World Cup, a Confederations Cup, and a Copa America.

Signed in 1989 to play a part of Cruyff’s “Dream Team,” the defender scored an incredible 102 goals in his six seasons at Barca, most notably the set-piece goal that won the team’s first European Cup in 1992. The Dutchman with a powerful right boot is also a 5-time Spanish Champion, a three-time Spanish Super Cup winner, and one time Spanish Cup winner. He still holds the La Liga record for 25 consecutive penalties scored.

Tony Adams is an Arsenal legend, having played his entire 22-year career as center-back with the club, captaining 14 of them. He also remains the only player in Premiership history captain to win three titles in 3 different decades. Known as “Mr Arsenal,” Adams is one of 5 player statues commemorated at Emirates Stadium.

Recognized as one of the best full-backs to play the game, Cafu guided Brazil to two World Cups titles, two Copa América titles, and a one Confederations Cup. With 142 appearances to the national side, no one will ever forget the sight of Cafu making one of his trademark runs down the right flank threatening the opposition with one of his deadly crosses.

The center back Alessandro Nesta played over a decade with the Azzurri, participating in three World Cups and earning 78 caps. While exiting the 2006 World Cup with an injury in the final group game, Nesta demonstrated his fair share of all-around talent and defensive skill in his ten years with Italy. Nesta finished his career in the Serie A with two Champions League trophies, three Serie A titles, and three Cup victories with both Lazio and AC Milan.

Recognized as a complete player and considered the best in the world in his prime, the German Lothar Matthäus scored 100 goals in 410 appearances for Bayern Munich. Although he left the club for a few seasons to play at Inter Milan, he returned to play another eight years in Bavaria, winning for more Bundesliga titles, two DFB Cups, and 1996’s UEFA Cup. Matthäus also spent two decades playing with the West German side, captaining the team that won the World Cup trophy in 1990. He won the Ballon D’Or that same year.

The French Defender Laurent Blanc played across some of the best teams in Europe including Barcelona, Marseille, and Inter Milan. He also served as the cornerstone of France’s World Cup in 1998 as well as the UEFA European Championship in 2000. In the last years of his career with Manchester United, Blanc earned 75 caps and scored four goals. He also helped the Red Devils lift the Premiership League trophy in his final year.

Voted the best defender in back to back Champions Leagues, Dutch defender Jaap Stam protected the back for a mix of reputable teams including Manchester United, Lazio, Milan, and Ajax. Most decorated at Manchester in the late 1990s, where he won the Premier League three times, the FA Cup, and the 1998/99 Champions League trophy.

With 116 caps, the defensive midfielder Marcel Desailly ranks as one of the best French players ever. He played a critical role in France’s run to the 1998 World Cup, demonstrating his expertise for smart, powerful tackles and ball-winning capabilities. He captained the side after the retirement of Didier Deschamp and helped lead Les Bleus to the 2001 Confederations Cup.

A successful crossover from the 80s, Italian defender Franco Baresi captained his side to four consecutive Italian League titles in the 1990s, including three Super Cups, and a Champions League trophy in 1994. He also helped guide Italy to its 1982 World Cup with a third-place finish in 1990 and a runner-up in 1994.

Argentine defender Javier Zanetti made a whopping 858 appearances for the Inter Milan side, captaining Internazionale for 13 of his 19 seasons. He’s the most capped player ever for Inter Milan and retains the record for most appearances in Champions League history as a team captain. A workhorse who led by example, Zanetti played a central role in Inter’s bucket of trophies including a Champion League, a UEFA Cup, five league titles, four Copa Italia victories, four Super Copa trophies, and a Club World Cup.