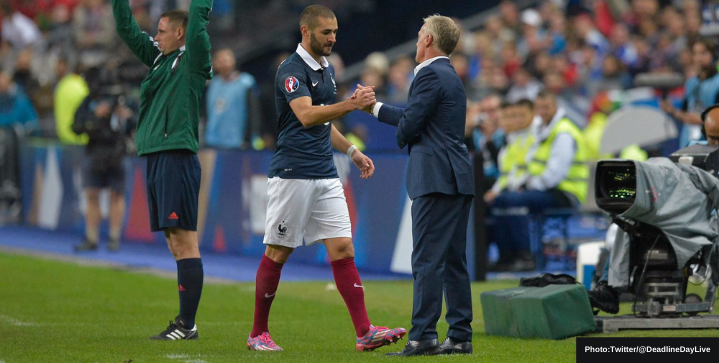 Karim Benzema is set to be included in France’s squad for the upcoming Euros this summer, according to L’Equipe.

The call-up comes six years after his last cap for the national team.

In 2015, the Real Madrid striker he was kicked off the squad for his alleged role in helping blackmail former teammate Mathieu Valbuena with a sex tape. Benzema denied the charges.

Deschamps outed the striker for both 2016 Euros and 2018 World Cup, which Les Bleus went on to win.

But with time past and Benzema in the form of his life at Real Madrid, French national team coach Didier Deschamps has no choice but to add Benzema to the tournament roster.

The player ranks third in La Liga with 22 goals this year, leading Los Blancos to a possible top-of-the-table finish with one game remaining in the season.

There’s no doubt that the striker’s inclusion in the lineup bolsters Les Bleu’s attack. A Griezmann-Benzema-Mbappe front three is no joke. Just look at this potential starting line-up.

“This won’t take long. You don’t confuse F1 with go-karting. And I’m being kind. Next… and I know I’m F1,” replied Benzema.

“Does everyone like that way of playing? I don’t know.”

Both fans and players alike must be ecstatic about Benzema’s return. Deschamps’s latest turnaround on Benzema could turn out to be a stroke of genius.