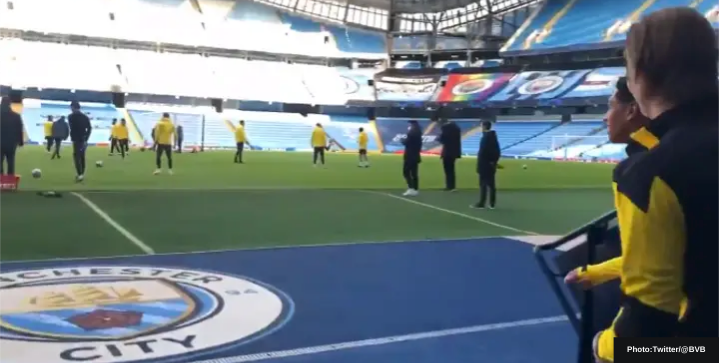 Manchester City fans are wound up after overhearing Erling Haaland say, “Beautiful, huh?” on his way out to the Etihad pitch this afternoon.

This might not be the last time this year Erling Haaland visits the Etihad. The situation around Haaland’s future continues to mount as the season draws to an end.

Even though Guardiola previously denied interest in the young superstar striker — “It is impossible, we cannot afford it” — it seems very well likely Haaland could be suiting up the sky blue next season.

“You understand, I’m not going to talk about any names of any players at another club. You understand it would not be polite for Borussia Dortmund and for Haaland. Absolutely, it’s not my business,” added Guardiola.

Haaland’s got the Blues

Haaland was sporting a light blue backpack on his way to Lowry Hotel in Manchester earlier today.

The Norwegian striker grew up in England, living in Manchester during his father Alfie’s three seasons with the Citizens.

Haaland has previously admitted his admiration for football journeyman Zlatan Ibrahimovic, who’s bounced around Europe’s top leagues himself. Coincidentally, Ibrahimovic called on Haaland to become the world’s next greatest striker.

I crown Haaland as the next Superstar. I like his style, the way he plays and most importantly the way he talks. He talks and delivers, that’s how a footballer should be. I like it.

It’s worth noting that Guardiola and Ibrahimovic never saw eye to eye either during the Swede’s two-year stint at Camp Nou if that augurs anything.

Borussia Dortmund take on Manchester City in the first leg of the Champions League quarterfinals tomorrow at 3 PM Eastern on Paramount +.

Not done yet: Ibrahimovic close to extending AC Milan contract