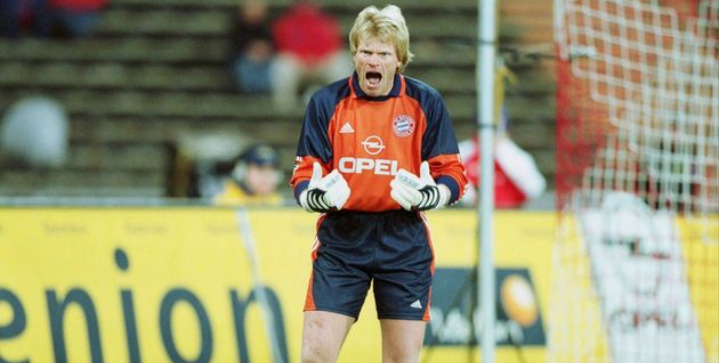 The most successful team in German football history, Bayern Munich has seen heaps of great players walk through the Bavarians’ door. In this post, we’ll highlight the team’s best eleven players to-date.

The Dutch footballer has spent a bright nine seasons with Bayern Munich, capping off with an unforgettable 89-minute goal against Borussia Dortmund to win the Champions League in 2012. The attacking midfielder has scored over 100 goals for Bayern, powering Bayern to six Bundesliga titles, four DFB Cups and the Champions League treble.

An 8-time German Champion along with six DFB cups, a UEFA Cup, and Champions League trophy to his name, 6’2 Oliver Kahn or ‘Der Titan’ holds the record for club appearances at 632. He remains the only goalkeeper to have ever won the Golden Ball at the FIFA World Cup.

The right-back played 17 seasons for the Bavaria side, captaining the side to its first Treble in 2012 with the Champions League, German League title, and DFB Cup under his belt. Known as a talented and judicious fullback — Pep Guardiola called him “perhaps the most intelligent player I have ever trained in my career.”

The German defender won an incredible seven titles at Bayern where he spent 15 seasons and played over 400 games. He also won the domestic up three times and finished as European Cup Runner-ups in 1982 and 1987. Later in his career, the red-and-white man transformed into a sweeper.

An attacking left-back, the speedster Paul Breitner won five German league titles, two league cups, and the 1974 European Cup. Remembered as a controversial player given his short stint at Real Madrid before returning to Bayern as captain.

Recognized as a complete midfield player and considered the best in the world in his prime, the German Lothar Matthäus scored 100 goals in 410 appearances for the club. Although he left the club for a few seasons to play at Inter Milan, he returned to play another 8 years in Bavaria, winning for more Bundesliga titles, two DFB Cups, and 1996’s UEFA Cup.

A complete midfielder, Bastian Schweinsteiger orchestrated the Munich midfield for 17 years. He won eight German league titles, seven German cups, and completed the treble with a 2013 Champions League trophy. Known as the ‘Fußballgott,’ he scored 45 goals in 342 domestic appearances with the Bavarian side.

Lewandowski is the Bayern Munich’s top non-German scorer with over 100 goals, also reaching the mark faster than any other foreigner. He once scored a Guinness World Record five goals in nine minutes in a 2015/16 match against Wolfsburg.

Known as ‘Der Bomber’, the German striker scored a record-setting 40 goals and led the league in scoring seven times. At 365 goals, he still runs the Bundesliga for most finishes of all -time. In his 15 years with the club, he won the league and cup four times each, along with one European Championship in 1972.