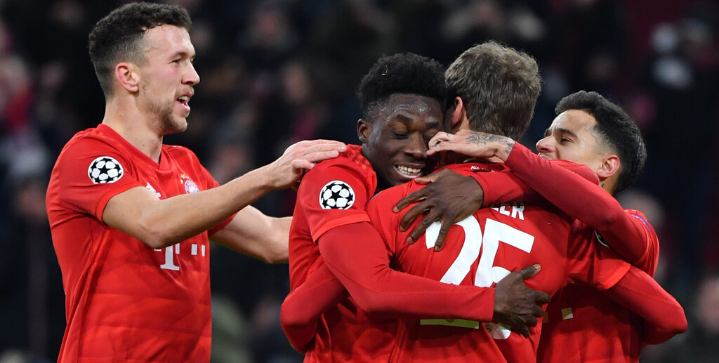 Bayern Munich defeated Tottenham 3-1 to remain unbeaten in Group B. In doing so, the Bavarian giants became the first German side to win all six group stage games.

Bayern Munich is only the seventh team in Champions League history to win all of their group games.

Bayern also scored the second-most goals in group stage history (24), just behind PSG’s 25 strikes in 2017-18. However, Bayern do advance to the next round with the best-ever goal difference (+19) in Champions League history.

With two assists, 105 touches, and eight take-ons, and five tackles won, Canadian Alphonso Davies is morphing into a dynamic player on both ends of the pitch.

He seemed to be running circles around the Spurs defense all night. But the left-back also demonstrated his versatility in running back to prevent Son Heun-min from scoring.

It’s no wonder Bayern sporting director Hasan Salihamidžić believes that Davies will become one of “the best players of his generation.”

He scored the Spurs’ only goal in the 20th minute, in doing so, became the club’s youngest goal-scorer in the tournament’s history. Dele Alli held the record prior, scoring at 20 years and 240 days.

4. Coutinho put on a show

The ex-Barcelona and Liverpool attacking midfielder scored his first Champions League goal of the season with a curler into the bottom of the box in the 64th minutes.

He nearly scored a creamer in the first half. But Spurs goalkeeper Gazzaniga nipped the ball underside the bar.

Bayern fans will be hoping the little magician continues his excellent form deep into the tournament.

The first time Bayern met Tottenham in the group stages, Serge Gnabry piled up four goals in what was a 7-2 drubbing of Spurs on their home soil.

This time around, the German winger only managed one. But it could’ve been many more.

Bayern veteran Thomas Mueller also got in on the action. Coming in as a substitute for the injured Kingsley Coman, the German scored his 44th goal of the competition to match Didier Drogba’s UCL goal tally.

Bayern netted a total of 10 goals against Spurs in two matches. Keep in mind that goal-machine Robert Lewandowski was rested on the bench for tonight’s match.