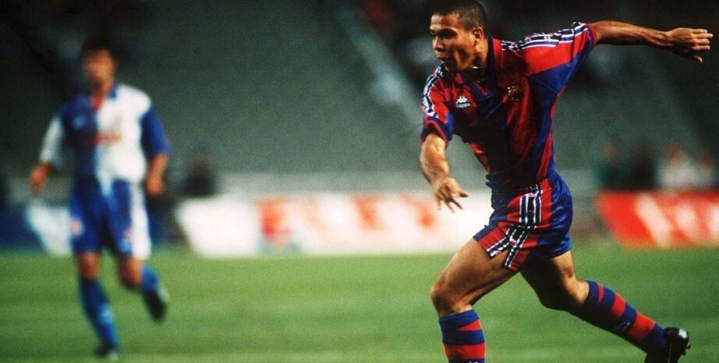 While much of Barcelona surge of success this century has been due to the homegrown program of La Masia — Lionel Messi, Xavi, Iniesta were all students — the team has benefited from outside signings as well. In this post, we’ll examine Barcelona’s top eleven signings of all time.

Luis Suarez broke all Barcelona transfer records with his €81m move to the Catalan side. But the investment has paid off hugely. The hard-working and physical attacker has scored 113 goals in 137 La Liga appearances. On top of his prolific goal-scoring record, he’s won a Champions League, three La Liga titles, and is a three-time Spanish Cup winner with Barcelona. His other trophies include a Copa America win with Uruguay where he was named the player of the tournament.

The Brazilian right-back Dani Alves signed to Barcelona from Sevilla for a €35m fee in 2008. In a trophy haul, Alves won 24 different trophies in his 8 years at Nou Camp including the treble in his first season. Recognized for his technical skills and pace, he’d add to his trophy collection a total of 3 Champions League titles, 6 League titles, 4 Spanish Cups, 5 Spanish Super Cups, and 4 UEFA Supercups.

The €24m transfer price Barcelona paid to snag Rivaldo from Rivaldo paid huge dividends. The long-legged forward scored 109 goals over 5 seasons, none more magnificent than the bicycle kick that completed his hat-trick against Valencia and got Barcelona into Champions League. Winner of back to back La Liga titles in 98 and 99, where he was the league’s top scorer, Rivaldo won FIFA Player of the year and the Ballon d’Or in 1999.

Ronaldinho from Paris Saint-Germain in 2003 for €30m

After an impressive 2002 World Cup, Ronaldinho attracted the attention of many of the world’s best clubs. But Barcelona made the most attractive offer. For a €30m fee, Ronaldinho moved from Paris Saint-Germain to the Catalan giants. And the rest is history. Ronaldinho scored 70 goals for the Catalan side over five seasons. He remains the only player other than Maradona to have received a round of applause from Real Madrid at the Santiago Bernabéu. The smiling superstar won both a Ballon d’Or and FIFA World Player of the year after winning Champions League and second La Liga title 2005.

Gerard Pique from Manchester United in 2008 for €5m

A student of La Masia, he transferred to Manchester United in 2004 before coming back home on a €5m fee to play for Barcelona in 2008. Not known for his pace, Gerard Piqué nonetheless morphed into one of Barcelona’s most versatile defenders given his dependability in the air and sharp passing abilities. In his 456 caps in his nine years with the squad, he’s won the Treble of Champions League, Spanish Cup, and La Liga twice.

Neymar signed from Santos to Barcelona for a reported fee of €57.1 million. As part of the core offensive unit consisting of Messi and Luis Suarez, Neymar helped Barcelona win the treble of La Liga, Copa del Rey, and the Champions League during the 2014-15 season. He scored 105 goals in 186 appearances before heading to Paris St. Germain on $263 million record transfer fee.

Ronald Koeman from PSV Eindhoven in 1989 for €5m

Signed in 1989 to play a part of Cruyff’s “Dream Team,” the defender scored an incredible 102 goals in his six seasons at Barca, most notably the set-piece goal that won the team’s first European Cup in 1992. The Dutchman with a powerful right boot is also a 5-time Spanish Champion, a 3 time Spanish Super Cup winner, and 1 time Spanish Cup winner. He still holds the La Liga record for 25 consecutive penalties scored.

Signing for a transfer of €24 million from Mallorca, the Cameroonian striker went on to have an illustrious career with Barcelona and Inter Milan in the first decade of the 21st century. At Barcelona, he scored a magnificent 130 goals in 199 games and won the Treble in the 2008/09 season winning Champions League, La Liga, and Copa del Rey.

Signed for €3.5m from Sporting CP, the crafty attacking midfielder played five years with Barcelona where he teamed up with the likes of Ronaldo and Patrick Kluivert to win two La Liga titles, two Copa del Rey, a Spanish Super Cup, and a UEFA Super Cup and Cup Winner’s Cup. He scored 45 goals in 249 appearances.

Sold to Barcelona in 1973 for a then-record transfer fee of €2m, the speedy Dutch forward helped Barcelona win its first league triumph since 1960. He also won the European Footballer of the year, which he repeated the following year. He appeared in a total of 148 games for Barcelona, totaling 48 goals but more importantly influenced the modern game with his philosophy on the architecture and space on the field. Not surprisingly, the mastermind of football is Barca’s winningest coach. From 1988 – 1996, he won the club’s first-ever European Cup, a Cup Winners Cup, four consecutive league titles, and one Copa Del Rey and European Super Cup, along with three Spanish Super Cups.

Transferring from PSV to Barcelona for a then transfer record of $19.5 million, Ronaldo spent one solid season with the Catalan giants where he upheld his growing prospects as the world’s best player. The Brazilian legend bagged 47 goals in 51 matches. He helped Barcelona win the Copa del Rey, UEFA Cup Winner’s Cup, and the Spanish Super Cup.