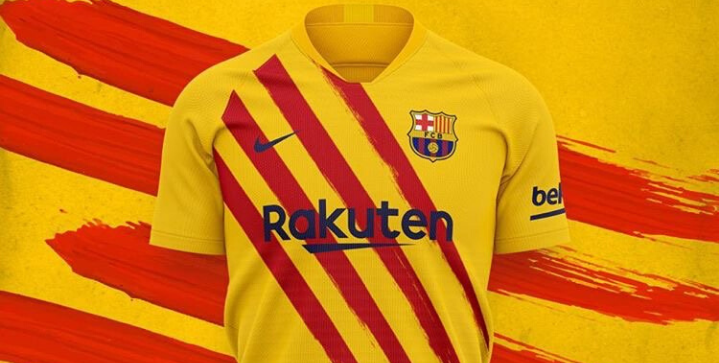 Barcelona have dropped their fourth kit with the motto “Ho portem dins” (It’s deep within us) to celebrate the club’s 120th anniversary.

Inspired by the team’s rich history and roots, the Nike manufactured kit features the primary colors of the Catalan flag, the Senyera.

The shirt features a yellow colorway merged into red diagonal stripes with the sponsored navy-colored logos.

Barca introduced the new shirt — the first time the club has introduced four in one season — on its official website :

The new design features a modern look in which the four red stripes appear diagonally across a yellow background. Another highlight is the retro style V-neck, while the shorts are in the same yellow hue as the shirt to create a sense of continuity from top to bottom. The socks are also yellow, with four red hoops and the Nike logo and the word Barça in blue.

There have been reports that Barcelona may sport the kit in this season’s biggest matches, such as inaugural El Clasico scheduled for December 18.

The kit is available exclusively at the Barça Stores at the Camp Nou but goes on sale worldwide next week.