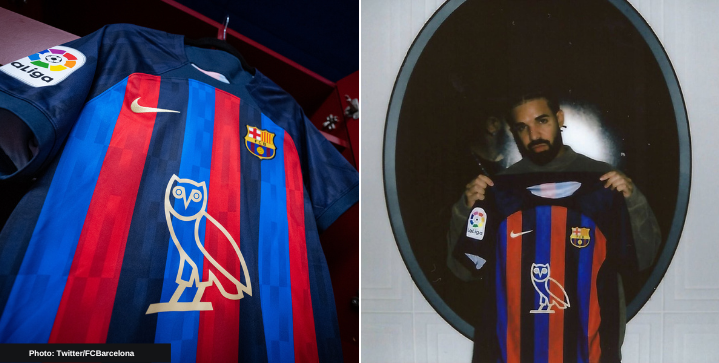 Barcelona will wear a limited-edition kit with the logo of Drake during El Clasico against Real Madrid.

The alternative kit is part of the four-year sponsorship deal between the Blaugrana and the music streaming giant.

“One of the main ideas behind the alliance between FC Barcelona and Spotify is to bring football and music together in order to connect with new audiences around the world,” reads Barcelona’s online statement.

“As both are capable of bringing people together and exciting fans, for the first time, the men’s football team will enter the pitch for Sunday’s Clasico wearing a jersey featuring the logo of an internationally acclaimed artist – rapper and singer Drake, winner of 4 Grammy awards and the first to surpass 50 billion streams on Spotify – rather than their main partner’s logo.

“So, on October 16, instead of seeing the world’s most popular audio streaming subscription service logo on the front of the Barca jersey, those watching the game against Real Madrid will see the silhouette of an owl – the logo of the Canadian singer’s brand.

“Spotify has given this privileged space on the jersey as part of the framework of the partnership with the Club, just one of the actions that both brands are putting into place to offer innovative experiences for football fans, as well as helping to reach new audiences through music.

“As was announced when the agreement was ratified, this type of exchange on the front of the jersey is scheduled to happen more as the season progresses.”

“To celebrate being the first artist with 50 billion streams on @spotify @FCBarcelona will wear the OVO owl at El Clasico on Sunday,” he wrote.

“This doesn’t feel real but it is.”

Unfortunately, the kit won’t be on sale, with only a giveaway to the luckiest fans.

Some of the Barca faithful are reacting negatively to the Drake news, given the artist’s apparent “curse” on teams he supports. The cursed meme has followed losing efforts from the Toronto Raptors, Manchester United, and Arsenal after Drake posed with players of those teams in recent years.

People speculate that the voodoo could even rob Benzema of this year’s Ballon d’Or.

Can Barcelona put a dent in the curse?