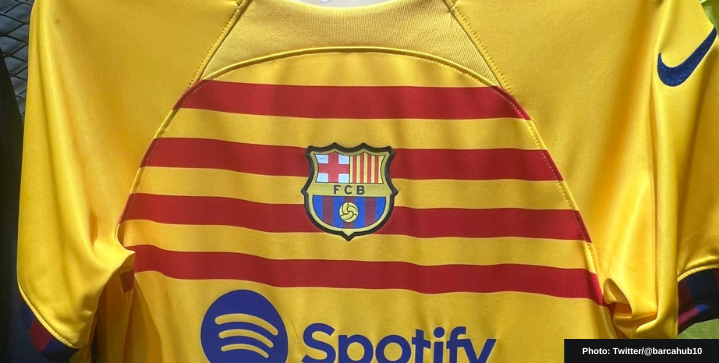 Barcelona’s 4th kit has been leaked and may be worn for the La Liga match against Girona this weekend.

The new kit takes its primary colors — bold yellow and red lines — from the Catalan flag, the Seynera.

As such, it has become an iconic piece of apparel for those who live and support the team — “Ho portem dins” (It’s deep within us) — as part of Catalan culture. It’ll also debut appropriately in the Catalan derby at Estadi Montilivi.

The Nike shirt features a yellow colorway with four red horizontal stripes across the chest — the 2019/20 version adopted a diagonal stripe look.

More interesting, this season’s iteration includes subtle blue and red stripes on the jersey cuffs. The Nike Swoosh also flanks the left sleeve as opposed to being on the chest. The Barca shield takes center stage on the chest while the Spotify logo is displayed below.

The shorts and socks accompanying the kit are also yellow, along with a blue training shirt and black jacket.

The kit will be available in the Barça Stores at Camp Nou and online later this month.