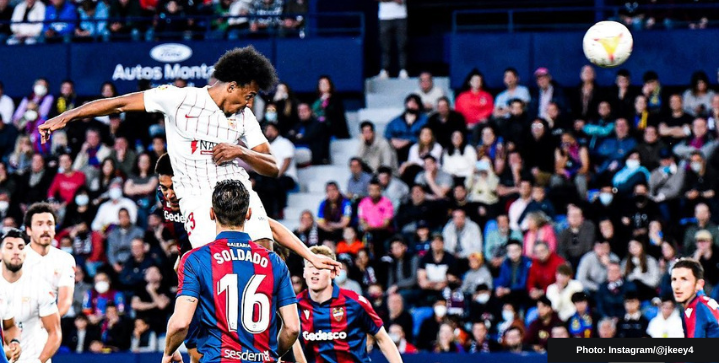 Barcelona’s summer spending spree continues. The Blaugrana are set to announce the signing of Jules Kounde from Sevilla, even putting the player’s kit on sale in preparation.

The 23-year-old center-back has been in the middle of a transfer saga between Chelsea and Barcelona all summer, but a last-minute call from Xavi seems to have shifted the footballer’s final decision. The Catalan giants also swooped in to sign Raphinha before the Blues and Arsenal only two weeks ago.

The final agreement for Kounde — reportedly less than a €60m fee — should be finalized tomorrow. Xavi sees Kounde as Pique’s successor.

Kounde shirts are already on sale

Barcelona is so sanguine about the Kounde deal the club has already started putting the player’s jersey on sale before ultimately confirming the signing.

According to journalist Gerard Romero, “Koundé T-shirts are already being printed in Barcelona stores.”

President Joan Laporta wants the Frenchman to join the rest of the team in Dallas tomorrow to present him to the fans before taking on Juventus at the Cotton Bowl. Barcelona face the Red Bulls in New York on Saturday.

Laporta also said he wants to present Lewandowski and Kounde together at Camp Nou. To give Barca fans even more to cheer about, Laporta is already talking about bringing back Lionel Messi next season, according to Diario SPORT.

“I hope that the Messi chapter isn’t over,” said Laporta. “I think it’s our responsibility to try to find a moment to fix that chapter, which is still open, so it turns out like it should have, and that is has a more beautiful ending.”