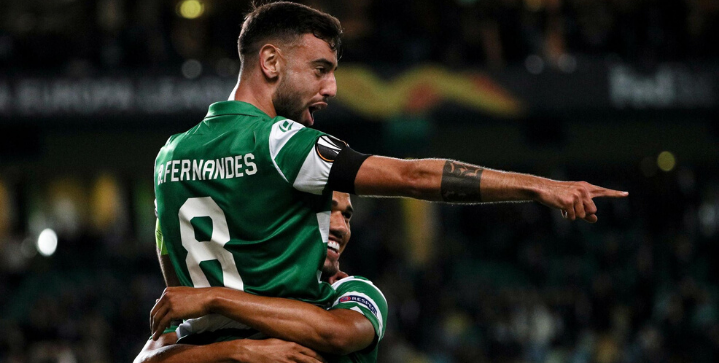 Barcelona are now in advanced talks to sign Portuguese star Bruno Fernandes on a five-year deal for a fee of €80m.

The Catalan giants would immediately loan the Sporting CP midfielder to Valencia until the rest of the season.

According to Superdeporte, Fernandes’ move will tee up the exchange for Valencia striker Rodrigo Moreno set to replace the injured Luis Suarez until the end of the season.

“We don’t talk about players from other teams. But [Rodrigo’s] name is on the table of the coaches. And a replacement will arrive. I do not know whether it will be from Barcelona B or from outside (the club). I like many players,” said Barca’s club president Josep Maria Bartomeu.

Meanwhile, Sporting manager Silas couldn’t guarantee the future of Bruno Fernandes’ future saying, ”I can’t confirm it. I would like him to stay. Right now I don’t know if he will stay or not, but I would like to count on him at least until the end of the season.”

Barcelona’s late swoop will come as a shock to Manchester United who’ve been trying to finalize a deal for Fernandes since the beginning of the month. However, United have refused to pay over the £57 million required to nail down the deal for the 25-year-old.

The Red Devils had planned to use the player to inject creativity into a side with injuries to Paul Pogba and Scott McTominay.

Fernandes is the Primeira Liga’s leader in goals and assists since the 2017/18 season. He’s been involved in a goal every 81 minutes in all matches for Sporting Lisbon this season.

According to journalist Juan Roberto at Sport TV (Portugal), Sporting Lisbon are purposely negotiating with Barcelona to speed up the deal with Manchester United. Fernandes would rather play at Old Trafford than Camp Nou and Valencia.

Will Barcelona steal the deal for Fernandes with a tit-for-tat loan for Rodrigo or will Manchester United accelerate their efforts to snatch their Portuguese man? Let us know where you think Fernandes is headed next on Twitter.