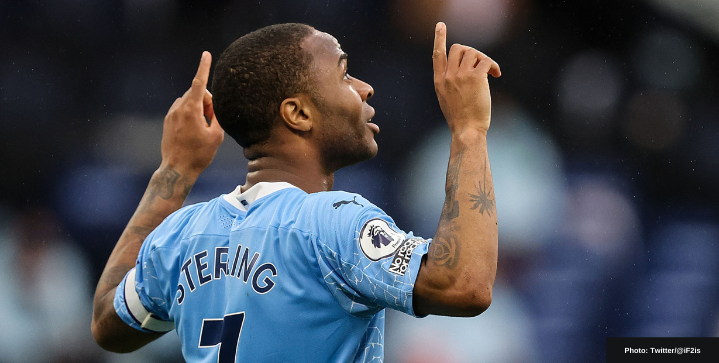 Barcelona want to sign Raheem Sterling this January to bolster their attacking options.

The English winger was linked with the Catalan giants last summer but the deal failed to come to fruition. City held on to Sterling because they failed to sign a top striker in Harry Kane or Ronaldo.

According to SPORT, Sterling is still interested in a potential move to Camp Nou should he be promised a lead role. The operation though would only be possible through a loan deal. Barcelona is still facing financial pressure but can afford the player’s wages.

Should City want to hang on to their attacker, they need to extend his deal before the May 2022 deadline.

Sterling has notched 88 goals and provided 115 assists in 302 appearances at the Etihad. He remains third for most assists (32) in the Premier League since the 2016/17 season.

However, his output declined last season with more time spent on the bench. He only managed to score 10 Premier League goals compared to his average of 18 from the prior three campaigns. He’s only scored once this season in seven matches.

Perhaps the switch to Camp Nou could reignite the playmaker’s career. “If there was the option to go somewhere else for more game time I would be open to it,” Sterling told the Financial Times.

“As an English player all I know is the Premier League and I’ve always thought you know maybe one day I’d love to play abroad. See how I would come up against that challenge.”

Guardiola responded to Sterling’s call to leave Man City by saying the player should leave if he’s unhappy.

“Some players want to play all the time but I can’t assure them of that. Always they have to speak on the grass — not Raheem, all of them,” Guardiola told reporters at today’s presser.

“What I want from Raheem and everyone is for them to be happy. If that’s not the case he has to take the best decision for his family.”