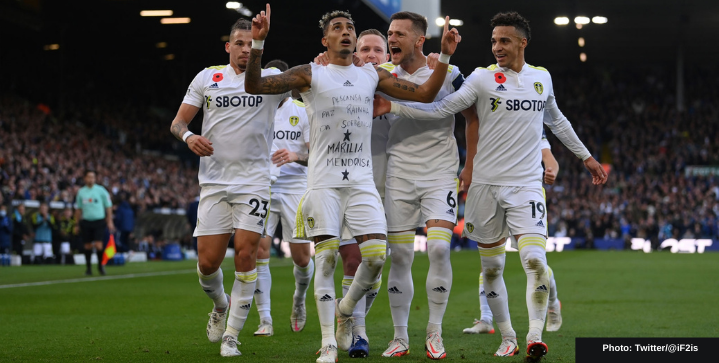 Barcelona are in advance talks with Leeds ace Raphinha about a possible move to Camp Nou this summer.

The 25-year-old has a lot of Premier League admirers.

Chelsea retain an interest in signing the winger after Leeds rejected the Blues’ €48m bid during the winter transfer window. Arsenal and Liverpool are also interested in negotiating for the winger. But it could be Barcelona and Raphinha’s agent, Deco, a former Barca player, who prize the Brazilian away from Elland Road.

According to Leeds Sporting Director Victor Orta, the player also has a release clause of €75M set to expire this summer and €25M, should Leeds get relegated. Either way, Barcelona are unwilling to pay more than €25M for Raphinha.

“Raphinha is a player that we really like and it’s true that Deco is his agent,” said Joan Laporta in an interview with RAC1 this week.

“We have a very good relationship, but I want to clarify that Deco is not paid by Barcelona. He will just help us because he is an expert on the Brazilian market.”

Raphinha’s signature depends on the renewal of the current Barcelona player Ousmane Dembele. The French winger has been intransigent in extending his contract with the Catalan giants, an issue Xavi is hoping to resolve by the end of the season.

According to Mundo Deportivo, Dembele told the Barcelona dressing room that he would like to stay. And renewed talks between the club and the player’s agent have begun.

Barcelona will not be willing to spend big on a player to back-up Dembele. Barcelona could also extend Adama Traore’s stay for another year.

Do you think Dembele will sign a new contract after three months of trying to force the France international out of the club?