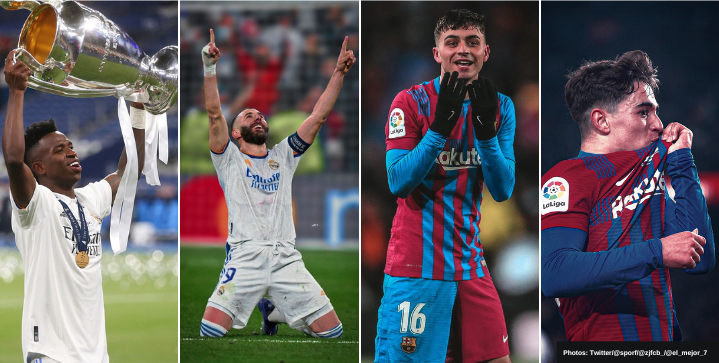 Who would’ve thought that Ronaldo’s once €1bn release clause would be equaled multiple times in the past year?

Lionel Messi had a €700m hefty buyout clause at the peak of his powers in 2017. With Ansu Fati, Pedri, Araujo, and Gavi, the Catalans have four players with €1bn buyouts on their roster, clearly locking down the club’s future.

As we close out the 2022 summer transfer window, let’s look at the players whose current contracts feature the biggest release clauses in world football.

The latest addition to the €1B release clause club is Vini Junior. On July 15, 2022, the 21-year-old Brazilian signed a new four-year contract with Real Madrid. With a €10m-a-year salary increase, Vini becomes one of Madrid’s highest-paid players.

Vini Jr enjoyed a magnificent season at the Bernabeu, adding the goal threat to his strong locker of ball carrying and dribbling skills. He scored 22 goals and notched 20 assists in 2021/22 alone, scoring the game-winner in the Champions League final.

Neymar says that “he reminds me of Iniesta.” Barcelona teenage midfielder Pedri became Barcelona’s first player to sign a new contract with a €1B release clause on October 14, 2021.

The 19-year-old Golden Boy winner surpassed the previous club record for a buyout option. Antoine Griezmann’s contract in 2019 included an €800m release clause, which topped Messi’s €700m from the renewal of the Argentine’s 2017 renewal.

The heir to Lionel Messi, Ansu Fati extended, his contract at Barcelona in October 2021. The long-term contract

Manchester United, Liverpool, and PSG offered Fati a salary twice that he earns at Barcelona (roughly €4M net/year). Still, the La Masia graduate wanted to stay with his home club.

Fati scored six goals and notched one assist in just 14 appearances in a 2021/22 season marked by injuries. The 19-year-old winger will be looking to pick up where he left off ahead of the 2022/23 season. He finished second in Golden Boy in 2020 behind Erling Haaland.

Barcelona also handed Uruguayan Ronald Araujo a new deal in May 2022 that includes a €1bn release clause. The center-back has played three seasons for the Catalan giants, topping it off with 30 La Liga appearances last term.

Now a mainstay of the first team, the 23-year-old looks to continue his defensive titan status against modern attackers. He also scored three crucial goals against Real Madrid, Sevilla, and Atletico last season.

The three-generational talents — Gavi, Fati, and Pedri — are all on the same salaries at €4M net/year.

Real Madrid extended Karim Benzema’s contract on August 20, 2021, and inserted the €1bn release clause. Benzema may be Madrid’s 34-year-old elder statesmen, but he hasn’t slowed down a bit.

Benzema wrapped up the best season of his career at Real Madrid by scoring 44 goals and providing 15 assists in all competitions, including these golazos on the road to Madrid’s Champions League triumph. The Frenchman could be on his way to securing his first Ballon d’Or.

Barcelona signed forward Ferran Torres from Manchester City for 60 million euros during the 2021/22 transfer window. His five-year deal included a €1B release clause to match teammates Pedri and Ansu Fati.

Xavi will be looking to get the best out of the 22-year-old Spaniard in his first full season at Camp Nou.