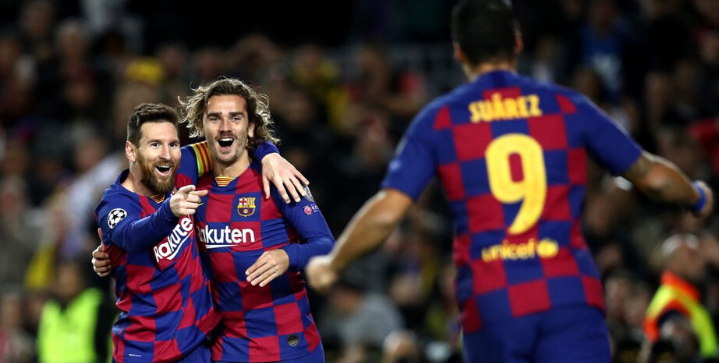 Barcelona secured first-place at the top of Group F and a place in the Round of 16 after routing Dortmund at Camp Nou 3-1.

1. Messi shines with a goal and 2 assists plus breaks another record

Just another day in the office for the talisman, Lionel Messi.

Tonight, Messi made his 700th appearance for the Catalan giants — only Xavi has put on the shirt more times. And Messi put on his trademark show: dribbling, scoring and setting up teammates with exquisite passes.

But he also set a new record. Messi’s goal in the 33rd minute marked the 34th opponent the Argentine has scored against in the Champions League, one more than Ronaldo and Raul. And he made it looks so easy, as the great ones usually do.

However, Messi received a yellow in the second half for simulation. That was unlike him.

2. MSG on target in the Champions League

Even more, all goals were set up by each other — first, it was Messi to Suarez, retributed by Suarez a few minutes later, and then Messi teed up Griezmann in the second half for a delightful finish.

Griezmann didn’t start the match. He was substituted for an injured Ousmane Dembélé in just the 26th minute.

MSG: Barcelona's front three all score in the same UCL game for Barcelona for the first time ✅ #UCL

Messi put it on a platter for Griezmann 🤩

The 22-year-old French winger was in tears when he was forced off the field in the 26th minute after sustaining what appeared to be a right thigh injury. He will undergo testing to determine the extent of the damage.

This was the first time this season Dembele has suffered a knock. He returned in late September after suffering a left hamstring injury in the season opener against Athletic Club.

Barcelona disciplined the young Frenchman for not reporting the injury sooner, even going so far as lining Dembele up as trade bait for Neymar.

“I don’t know if it’s a relapse or what leg it is. It has been a rare move because it has been in a jump, in which the leg has gone backwards. I don’t know,” said coach Valverde after the match.

“Right now we are sad for him because we are qualified but the bad news is the injury.

“We know he is suffering and we will see if we can help him.”

Dembélé gets injured trying to score a goal and landing awkwardly, not due to fitness.

He leaves the pitch in tears and you get these hippies that call themselves fans criticising him. What a toxic fanbase. It just gets worse and worse. pic.twitter.com/O8QEkm8DEV

In what was otherwise a lackluster team performance from BVB, Jadon Sancho came on as a substitution and snatched a brilliant individual goal. According to the Sun, BVB boss Lucien Favre benched the Englishman for a lack of focus, saying “”We need players on the pitch who are focused and ready.”

The strike marked 20 goals for the Borussia Dortmund winger across all competitions — he’s also provided 28 assists. It’s no wonder Manchester United have made the 19-year-old wonderkid a mandatory transfer target for the January window.

5. Valverde quiets the critics, for now

“We had very good moments today. The goal today was to secure our place in the knockout stage,” Valverde told reporters in the post-match press conference.

Barcelona’s first-place finish in the Group of Death along with an overall solid performance lifted by another Messi masterclass will help silence Ernesto Valverde’s critics for the night.

But as Sid Lowe so eloquently puts in The Guardian, the team, despite leading the La Liga table and progressing in Europe, are still “flawed” and “dysfunctional” under Valverde.

Barca fans can’t let go of the club’s capitulation in Liverpool last season, along with Barca’s defeat in the Copa del Rey final. Despite these key losses and lack of fan enthusiasm behind Valverde, the board continues to back the Spaniard.

What will happen when Messi no longer saves the day and Valverde’s luck runs out? Valverde just bought himself another week, at least.