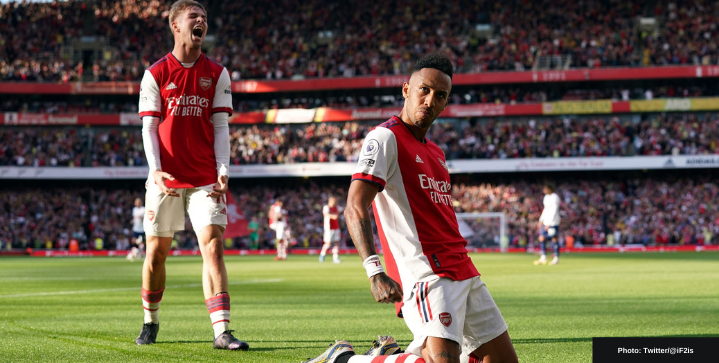 Arsenal striker Pierre-Emerick Aubameyang has made a surprise visit to Barcelona today to try and force a last-minute transfer.

The Gunners star is out of favor in North London after facing disciplinary issues last November. Head coach Mikel Arteta further ostracized the player by stripping his captaincy and forcing him to train by himself.

Now, the former captain is working with his representatives at Camp Nou to try to nail down a last-minute loan deal. Meanwhile, Arsenal are still searching for a replacement striker having failed to land Dusan Vlahovic with Alexander Isak and Dominic Calvert-Lewin at the top of the list.

“Arsenal have made clear to Pierre Emerick-Aubameyang few minutes ago that they’ve no intention to collaborate or pay part of his salary for Barça,” shared transfer insider Fabrizio Romano.

With the clock ticking, Arsenal and Barcelona are desperately trying to hash out a deal. At the centerpiece of the equation is Ousmane Dembele, who Xavi demanded leave due to the Frenchman’s intransigence over renewing his contract. A swap deal with the Gunners is unlikely with Dembele linked with Newcastle, Chelsea, and Manchester United.

Aubameyang is on stand-by for a medical as he awaits the dealmakers on deadline day. “We would like to incorporate Aubameyang. It’s very complicated but there is hope,” said Barcelona president Joan Laporta.

Can Barcelona get a deal over the line for Aubameyang with just a few hours left?