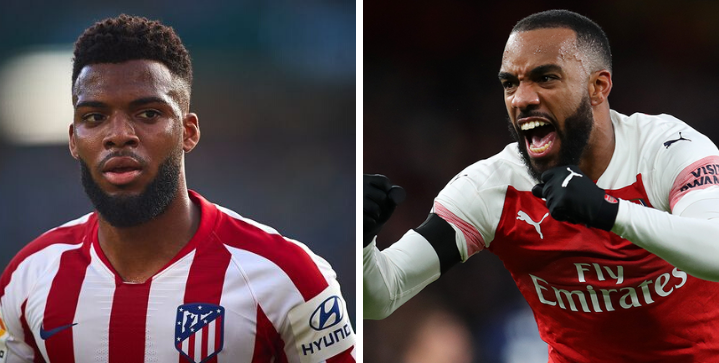 Diego Simeone’s side are looking for more attacking options to bolster a squad that’s only scored 22 La Liga goals this campaign.

Should PSG refuse to sell Cavani — the Gunners are also linked with the Uruguayan — Atletico will move on to the Frenchman as plan B, according to Marca.

This isn’t the first time Lacazette has been linked with Los Rojiblancos. The 28-year-old nearly struck a deal with Atleti back in 2017 but the deal failed to materialize.

Meanwhile, Thomas Lemar has fallen out of Diego Simeone’s favor. The boss recently admitted that Lemar’s “characteristics have always excited me. But he hasn’t been able to live up to expectations.”

Is the proposed swap a good deal for Arsenal?

While the Gunners have expressed interest in acquiring Lemar, they were not willing to do so at the expense of losing Lacazatte.

Lacazette has scored 42 goals in 107 appearances for Arsenal.

Currently in a goal drought with just six strikes this season, he could recapture his magic in Pierre-Emerick Aubameyang’s absence. Aubameyang is serving a three-game suspension for his straight red card against Crystal Palace last game.

“They have to make a step forward now. If he (Aubameyang) is not able to contribute to the team with goals like this, then someone else has to do it and I want to see that reaction too,” Arsenal boss Mikel Arteta told reporters yesterday.

Arteta’s statement sends a message to Lacazette that he backs the Frenchman and expects the player to return back into a goal-machine.