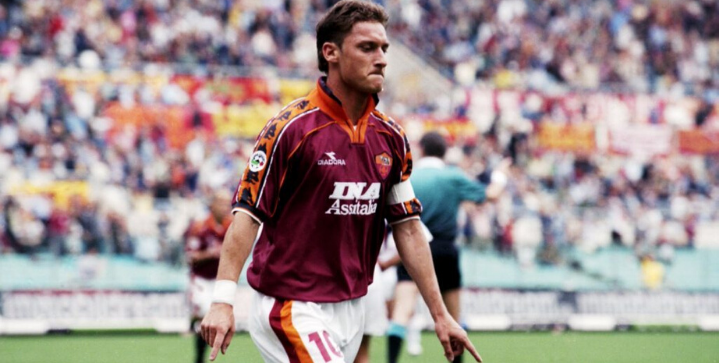 From one-club hero Francesco Totti to current team captain Daniele De Rossi, A.S. Roma has also hosted some of the best footballers in the world. In this list, we’ll round up the top eleven I Giallorossi to-date.

A keen playmaker, Di Bartolomei captained an AS Roma side that won its first Serie A title in 41 years. He played 308 times for the club, guiding Roma to three Italian Cups and a Champions League appearance which they lost. Sadly, Di Bartolomei took his life in 1994, a decade after the defeat.

A skilled defender, known to make a pinpoint long-ball passes to forward pushing teammates, the Brazilian Aldair captained the side that one the Italian league title in 2001. He played 13 seasons with AS Roma, spanning 400 Serie A games with the club.

Known as the ‘The Golden Boy’ or Gladiator, or simply the Captain, Francesco Totti grew up in Rome destined to play for the Giallorossi side. The one-club man, he played a remarkable 786 games for Roma, spanning 25 years that saw him win the Serie A title, two Italian Cups, and two Supercoppa titles. His 250 goals place him as second in Serie A history.

A one-club man for the past 17 years, De Rossi took over the captain role from the retired Totti in 2017. The defensive midfielder has made nearly 600 appearances with the Roma side, winning the Coppa Italia twice and Supercoppa Italiana once. He left Rome after 18 seasons with the club.

Paul Roberto Falcao played five years with Roma where he appeared in over 100 games and scored 22 goals. He won two league titles with Roma, once earning the nickname “the 8th King of Rome,” for his majestic 82-83 season.

A diligent center-forward Roberto Pruzzo played a decade for Roma, becoming one of its most efficient goal-scorers — he led the club strikes in 1981, 1982, and 1986. He finished his Roma career with 136 goals in 315 appearances while winning two Italian cups.

Giannini made over 400 appearances for Roma, scoring 49 goals over this 15-year career. Made captain for nine of the seasons, the creative midfielder won the league title and three League cups.

The ambidextrous footballer could play on both sides of the pitch, including attacking midfielder. A one-club man, he played in 300 Serie A games for the club and won a league title along with five Coppa Italia.

A one-club player, Giacomo Losi spent 15 years with the club where he picked up 450 caps and earned two Copa Italia. Nicknamed the ‘Heart of Rome’ (“Core de Roma”), Francesco Totti is the only other player to make more appearances than him.

The defensive captain Sergio Santarini played 344 games over 13 years for Roma, where he won the Italian Cup 3 times. Known for his efficiency and work ethic, the Italian never missed a game from 1975 to 1978.

The Brazilian full-back was a threat down the right flank, earning the nickname Il Pendolino (“The Express Train”) during his six seasons at the club. He helped Roma win its first Scudetto in 18 years, winning two overall along with two Italian and European Super Cups.