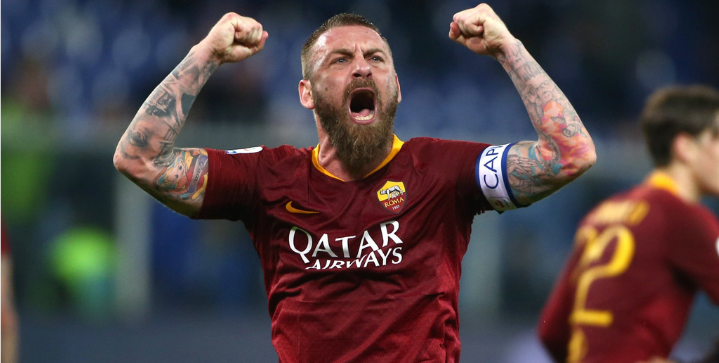 AS Roma legend Danielle de Rossi will play his last game with his hometown club at the end of the month.

His illustrious career began 18 years ago as a 17-year-old.

Along with fellow one-club man Francesco Totti with whom he inherited the club’s captaincy in 2017, De Rossi recorded 615 appearances, 63 goals, and 3 trophies.

Roma management felt it was time to part ways despite the midfielder’s decision to go on:

“I feel I could still have a made an impact on this team, playing five, 10 games,” said De Rossi “[I could help] in the dressing room.

“But I agree the club has to make a decision or I could just get to the end of next season and decide I want to carry on. I’m a little disappointed we haven’t spoken enough this year and I hope this [treatment] will improve in the future because I am a fan, but I understand it’s the club’s decision.”

The Italian World Cup winner wants to play in the Premier League next season, with offers potentially waiting.

“Today I received 500 text messages,” he said. “I’ll see if some offers arrive. I feel like a footballer and still want to play football.”

Almost 18 years after a fresh-faced local teenager named Daniele De Rossi made his #ASRoma debut against Anderlecht, the 35-year-old club captain will pull on the Giallorossi shirt for the final time against Parma.

It will be the end of an era.