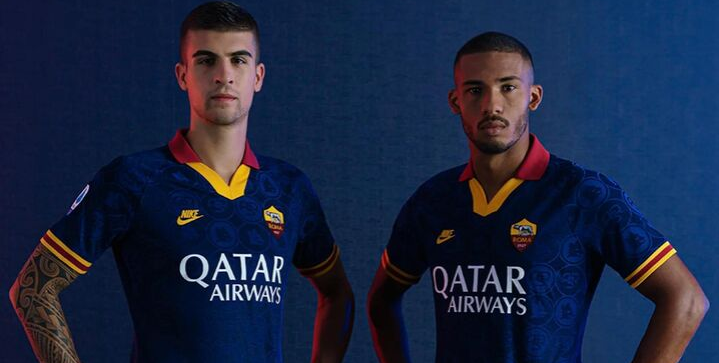 As if the new 2019/20 kit with the lightning effect wasn’t cool enough, AS Roma pulled another piece of shirt art out of the bag.

The Giallorossi debuted a retro third jersey for the 2019/20 Europa League on Thursday in the team’s 4-0 routing of İstanbul Başakşehir. And it’s an absolute gem.

According to designers at Nike, “AS Roma’s 2019-20 third kit is an imagination of a’90s club classic — complete with dark blue body and a vivid Giallorossi trim, which covers the collar and the cuffing of both sleeves.

“The jersey’s allover jacquard pattern is made of rows of circles, each containing either the “ASR” typography from the classic Roma crest or the “Lupetto” (wolf’s head), another powerful club symbol. Dark blue shorts and socks, both of which feature Giallorossi detailing and a Nike Futuralogo, complete the kit.”

Roma’s third jersey follows in the footsteps of Nike’s throwback designs for Inter Milan and Barcelona.

Perhaps the only thing missing is seeing Francesco Totti or Danielle De Rossi in one of these.