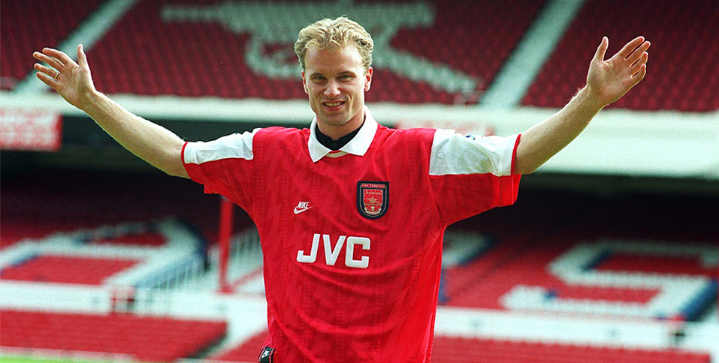 One of the most prized clubs in the world, Arsenal have featured some of the best strikers to play the game. Here’s a list of the top eleven of them ranked.

The King of Arsenal, Thierry Henry remains Arsenal’s all-time scorer with 228 goals in all competitions. Gaining the reputation as one of Europe’s most feared strikers, Henry became the Premier League’s top goal-scorer in 4 different seasons, notching a prolific 32 goals and 23 assists in the 2002-03 season. With the ability to score anywhere on the pitch, he elevated his game in the 2003-04 season, scoring 39 goals in the Gunners’ unbeaten top-flight league season. Considered the greatest Gunner of all time, Henry won two league titles, three FA Cups, four Golden Boots, and five Player of the Year awards throughout his career.

Dennis Bergkamp came to define class during his 11 seasons at Arsenal, showcasing his creativity and vision. He scored 120 goals with the club, most notably the one-touch and subtle flick past the Leicester City goalkeeper in 1997, where he also scored his first hat-trick. Bergkamp also recorded 94 assists during his time at Highbury, making him the Gunners’ top assist provider to this day.

A prolific goal-scorer, Ian Wright spent 7 years with the Gunners, where he notched 185 goals and won five trophies. He remains second on Arsenal’s all-time scoring list behind the one and only Thierry Henry. Wright’s antics on and off the field made him a cult favorite among fans.

While he ditched Arsenal near the end of his career to transfer to arch-rivals Manchester United, Robin van Persie put in an excellent run for the Gunners. He scored 132 goals in 278 matches and helped lead the side to the FA Community Shield and the FA Cup in 2004/05.

The giant striker often came off the bench as a substitute for Henry and Dennis Bergkamp at Arsenal, where he scored 12 goals during the 1990-2000 season. He was a winner of two Premiership titles and helped the Gunner snag two FA Cups.

The French striker morphed into a prolific striker during his five and half-year spell at Arsenal, scoring 105 times over 253 appearances. Instrumental in winning two FA Cups, Giroud will also be remembered for his amazing scorpion goal against Crystal Palace in 2017.

The French striker only played two years with the Gunners but he made the most of it. He bagged 28 goals in 90 impactful appearances, helping Arsenal win the FA Cup and Premier League Double in the 1997/98 season.

Signing for a then Arsenal transfer record €53 million from Lyon in 2017, the French striker Alexandre Lacazette scored 17 goals in his debut season with Arsenal. He won Arsenal’s Player of the Season in his second term, notching 19 goals and providing 15 assists in 49 games. “Laca” won the FA Cup and finished second in the UEFA Europa League during his time at Arsenal before moving to Lyon to start the 2022/23 season. He and Aubameyang once formed one of the best-attacking pairs in football.

Once the likeliest prospect to fill the boots of club legend Thierry Henry, Aubameyang still made his own memorable history as a Gunner. The Gabonese international won the Golden Boot in his first full season with the club and the 2019-20 FA Cup. “Auba” finished his Gunner’s career with 92 goals and 21 assists in 163 appearances.

Like Van Persie, the Chilean forward Alexis Sanchez left the Gunners for arch-rivals Manchester United but his tenure in London was worthy of making the list. He scored 80 goals in 166 matches and helped Arsenal to two FA Cups.

The Arsenal forward Alan Smith earned two Golden Boots with the Gunners, finishing his illustrious career with 115 goals in 347 outings. His honors include two First Division titles, an FA Cup, League Cup, and UEFA Cup Winners Cup during the 1993/94 season.